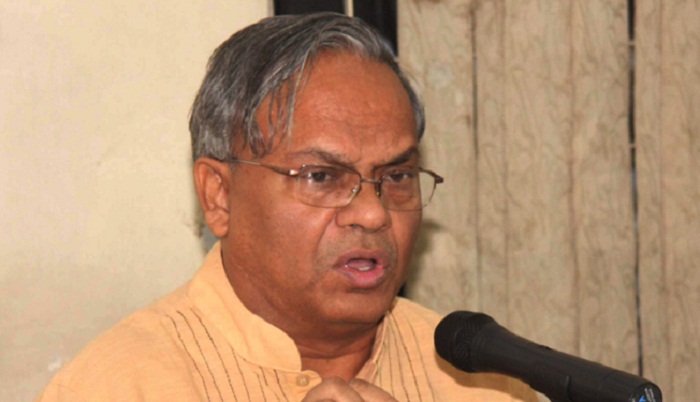 BNP on Sunday accused the government of conspiring to capture its Nayapaltan central office by forming a ‘false party’ with some street urchins.

“A false BNP has been launched with some bad elements and street boys … some of them were sent a few says back to attack our party office. They again tried to march towards our office today (Sunday),” said BNP joint secretary general Ruhul Kabir Rizvi.

Speaking at an emergency press briefing at the party’s central office, he further said, “It’s a heinous strategy of the government and a grievous misdeed. We strongly condemn and protest it.”

He warned the government of bad consequences if it continues such activities, UNB reports.

Earlier in the day, a group of 10-12 supporters of ‘Asol BNP’ brought out a procession and marched towards the BNP office from Bijoynagar Nightingale crossing around 3:45pm with a banner inscribed with ‘Showdown of Revolution’.

Activists of BNP and its associate bodies chased them, foiling their move to enter the party office.

The BNP men also torched a vehicle in which ‘Asol BNP’ men kept loudspeakers playing a CD of poems of its chief Kamrul Hasan Nasim.

On January 2, BNP men also foiled an attempt of a group of ‘Asol BNP’ activists to capture the party’s Nayapaltan central office.

Rizvi alleged that the government alongside harassing and repressing their leaders and activists across the country, making evil efforts to obstruct the party’s organisational activities.

He said the government will not be able to split BNP and unity of the nationalist forces, no matter how much conspiracies it hatches.