Bangladesh on highway of plundering, not dev: Moyeen Khan 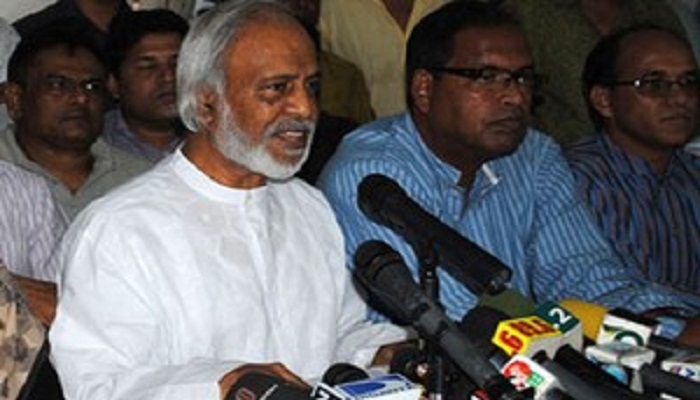 Moyeen Khan made the comment at a press conference reacting to prime minister’s remark that Bangladesh is now on the highway of development.

On Tuesday evening, Prime Minister Sheikh Hasina addressed the nation marking the completion of two years of her 2nd successive government after a landslide victory in the January-5 national election held in 2014.

In her speech, the prime minister noted that Bangladesh is now on the highway of development and is a role model of development. “The country’s GDP growth rate will soon cross the seven percent mark as it has successfully maintained over six percent growth rate for the last few years.”

BNP arranged a press conference at the party chairperson’s Gulshan office in reaction to the Prime Minister Sheikh Hessian’s address to the nation.

Moyeen claimed that the GDP growth had been 6.7 in the last fiscal of their party-led government in 2006. “Awami League could not achieve 6.7 percent GDP growth over the last seven years.”

He alleged that the government showed inflated GDP growth every year that was challenged by the World Bank and the Asian Development Bank (ADB). “Despite that, it couldn’t achieve 6.7 GDP growth rate. This indicator is enough to judge where our economy is.”

The BNP leader said though the government utters development it has only taken some mega projects cost 20-30 thousand crore in the capital city. “They did nothing out of it. They destroyed the infrastructure of the rural economy.”

He said the country’s overall development cannot be ensured only by making some flyovers and metro rail. “Economy’s main roots are linked with rural areas.”

Moyeen Khan, a former minister, also claimed there has been no foreign and local investment in the country over the last two years for lack of political stability. “Our economy has now turned hollow.”

The BNP leader also observed that huge money is being siphoned off for lack of investment friendly atmosphere here.

Mentioning that the oil price has gone down to 30 dollars on the international market, he said the price of per litre petrol should be Tk 25. “But, the government is selling it at Tk 99. So, who’re pocketing the remaining money?”