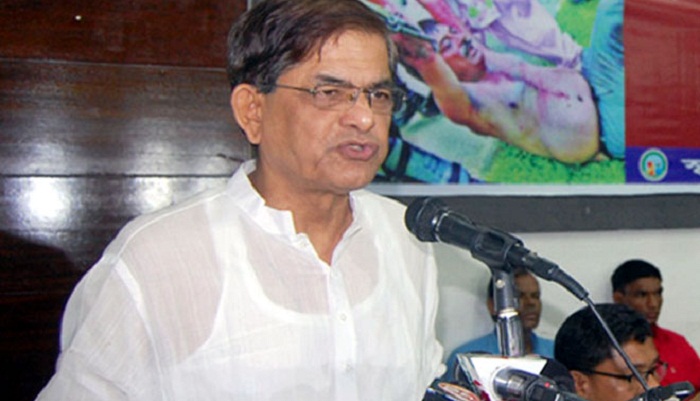 Criticising the Prime Minister’s address to the nation, BNP on Wednesday said PM didn’t give any direction for resolving the country’s ‘deep political crisis’.

BNP acting secretary general Mirza Fakhrul Islam Alamgir made the observation at a press conference that was arranged at BNP chairperson’s Gulshan office to formally respond to the Prime Minister Sheikh Hessian’s address to the nation.

“The Prime Minister’s address to the nation has frustrated the nation. The nation had expected that there would have a guideline in her speech to overcome the country’s deep political crisis. Unfortunately she gave an old and routine speech,” Fakhrul said.

On Tuesday evening, Hasina addressed the nation marking the completion of two years of her 2nd successive government after a landslide victory in the January-5 national election held in 2014.

Fakhrul said the last two years of the current government was a period of deporting the democracy and dashing people’s hopes and aspirations by politicising the electoral process.

“The last two years was also an unprecedented example of unleashing limitless repression and suppression on the opposition supporters and those who don’t agree with the government,” he observed.

The BNP leader claimed that 440 people had been subjected to political killings while 267 others made disappeared and 337 maimed during the last two years.

Besides, he said 21,083 political cases were filed against 4,16,747 people and 17,885 jailed after their arrests during the period. “Their (govt) main target was to eliminate democracy in a bid to perpetuate their power by snatching people’s rights.”

The BNP leader accused the government of politicising all the democratic institutions to establish one-party rule in the name of democracy.

Terming January-5, 2014 polls a bizarre one, he said, “Democracy has been obliterated by forming a rubber-stamp parliament and strange government through that farcical election.”

The BNP acting secretary general said it has been proved through the 10th parliamentary polls, upazila, city and municipal ones that no fair election could be held under the current regime.

“People’s hopes and aspirations were not reflected in those polls. Instead, people’s right to vote was snatched using the state machinery and resorting to vote rigging.”

Fakhrul said there was no guideline in the Prime Minister’s speech to make the election system free from party influence and hold an acceptable election.

Referring to the Prime Minister’s remark that the media in Bangladesh is enjoying complete freedom during her government, Fakhrul said her statement in no way is acceptable as the mass media are controlled by the government.

Mentioning that Bangladesh is now at stake, he said there are no democracy and voting rights here. “So, holding a free and fair election immediately through discussions with the opposition parties is only way to resolve the country’s political and economic crisis. This is what the nation expects.”

Fakhrul said as a liberal democratic party BNP believes in transfer of power through a credible and inclusive election.