Hasina should be given few more terms for premiership: Ashraf 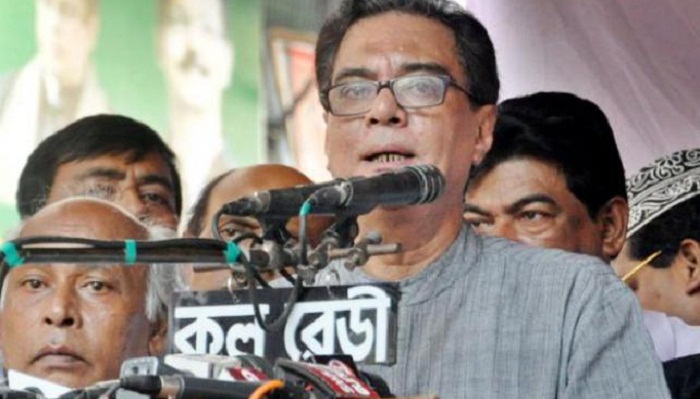 Awami League general secretary and Minister for Public Administration Syed Ashraful Islam on Monday said Sheikh Hasina should be chosen as the Prime Minister for a few consecutive terms for the sake of country's development.

"Sheikh Hasina should be given more time. She should be given not another term but a few more terms for premiership. It's not for Sheikh Hasina but for Bangladesh, for its people and its development," he said while speaking at a huge public rally at the historic Suhrawardy Udyan in the city.

"Like her illustrious father Bangabandhu, Sheikh Hasina can't be contained," said Syed Ashraf adding that Bangladesh is now one of the fast progressing countries as the state achieved development in all the sectors including in its foreign policy and economy.

"Sheikh Hasina is inevitable for the sake of continuation of the country's progress. Let's join hands and take part together in ensuring success of the nation's progress," the AL general secretary said.

Calling upon the party leaders and workers to remain united for building a golden country as dreamt of by Bangabandhu, Amir Hossain Amu said Prime Minister Sheikh Hasina has been leading the country towards progress from the forefront by facing all conspiracies and so all should work together under her brave, visionary and farsighted leadership.

In reply to recent remarks of BNP chairperson Begum Khaleda Zia that the country has been under autocracy, Suranjit Sengupta said, "None disturbed you at your public rally. It's possible for Sheikh Hasina only. You haven't gone to jail being an accused of killing nearly 200 people by setting them on fire. That would not have been possible had the country been under autocracy. It's a good symptom that you have changed your stance in participating in poll but you have to have patience. Two years have passed...Wait...Reorganise your party and then take part in the polls." Pointing at Begum Khaleda Zia, Mohammad Nasim said, "You have been defeated to Sheikh Hasina in the field of politics and polls. You will have to face defeat also in the polls of 2019. People of the country have rejected you for choosing the political path of torching properties and killing."