No dialogue with subversive actors: AL 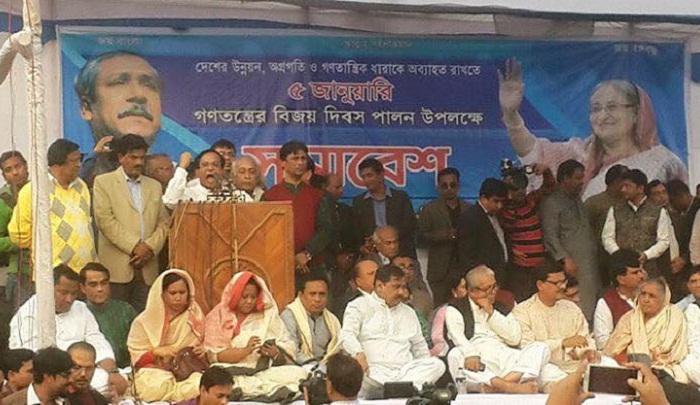 Rejecting outright BNP chairperson’s Khaleda Zia’s proposal to hold a dialogue, Awami League leaders on Tuesday said that there will be no dialogue with the persons carrying out subversive acts.

They also reiterated that there would have been a constitutional vacuum in the country had the January 5 election not been held, adding that the country would move forward under the leadership of Prime Minister Sheikh Hasina and none will be able to hinder it, UNB reports.

The leaders came up with the observation while addressing rallies organised at Bangabandhu Avenue and Russell Square marking the ‘Victory Day for Democracy’ on Tuesday.

“By holding the elections, Sheikh Hasina not only formed the government but also protected the state. If she failed to hold the election, Bangladesh would become the country of razakars where the spirit of liberation war would be destroyed,” Industries

Amu said “The day wasn’t just a day to save democracy, but also to save the constitutional vacuum in the country.”

Agriculture minister Matia Chowdhury said the country would move forward under the leadership of Sheikh Hasina.

“No one would be able to resist the development of the country as people are the main strength of Sheikh Hasina. On the other hand, conspiracy is the strength of Khaleda Zia. She (Khaleda) polluted the country’s politics as an agent of Pakistan,” Matia, also the presidium member of AL, said.

“The mother (Khaleda) and the son (Tarique) together in consultation with Pakistan, tried to carry out all sorts of misdeeds to destroy the country. There will be no dialogue with the persons carrying out subversive acts. Rather they will be tried for subversive acts like

other countries of the world,” he said.

Commerce Minister Tofail Ahmed said “An election was held on this day in 2014 thanks to the firmness of the Prime Minister. Sheikh Hasina put all out efforts to bring BNP into the election. But Khaleda Zia didn’t respond to her call.”

Observing that Khaleda Zia should observe the day as repentance day, the commerce minister said “Many leaders of BNP said the party is on the verge of destruction due to Tarique Rahman.”

On the municipal polls, Tofail, also a member of AL advisory council, said “BNP took part in the just-concluded municipal polls. Sensing the appearance of Khaleda Zia, it can be said that she would also take part in the next national election to be held in 2019.”