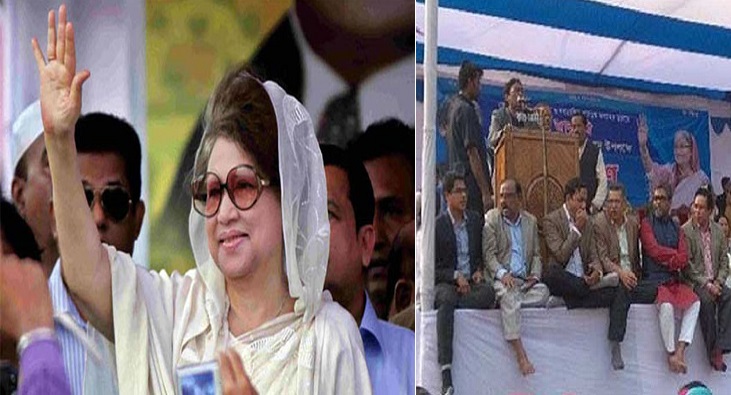 Suddenly the country’s political arena becomes a hot bed today as both BNP and AL organized separate rallies in front of their respective party offices to mark the second anniversary of the much-talked-about January-5 general election held in 2014.

Hundreds of leaders and activists of Awami League and BNP gathered in their respective rally venues in the capital.

The ruling party organised the two rallies at Bangabandhu Avenue and Russell Square, marking the ‘Victory Day for Democracy’, while BNP arranged its rally in front of its Nayapaltan central office, marking what it says the ‘Democracy Killing Day’.

On Monday, Dhaka Metropolitan Police (DMP) gave permission to both the parties to arrange their rallies on some conditions in front of their respective party offices at Bangabandhu Avenue and Nayapaltan in the capital.

Earlier, AL declared to hold a rally on January 5 to observe ‘Victory Day for Democracy’, the second anniversary of January 2014 election, while BNP announced its programme for the day to observe ‘Democracy Killing Day’.

As both Awami League and BNP initially announced their respective rallies at Suhrawady Udyan, police turned down the pleas of both the parties saying no programme and counter-programme will be allowed there.

The 10th parliamentary elections were held on January 5, 2014 with the BNP-led 18-party alliance boycotting it.