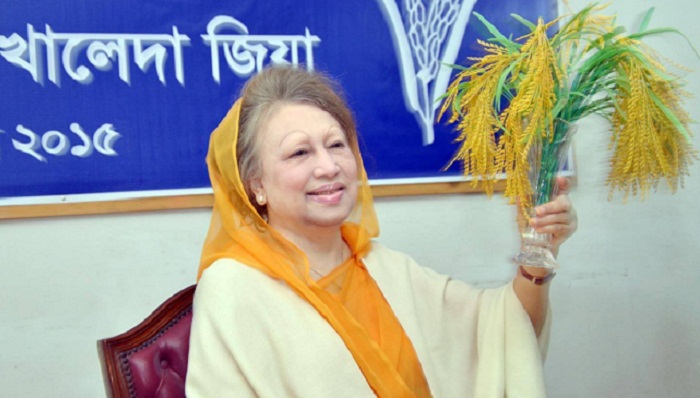 Accusing the ruling party of conspiring to rig vote, BNP Chairperson Khaleda Zia on Monday urged people to come out in groups and vote spontaneously on December 30 to protect their rights to franchise.

“We’ll be there in the election battle firmly. People’s united strength can foil any evil motive of the autocratic ruler,” she told reporters at a press conference at her Gulshan office, reports UNB.

Khaleda further said, “Those who snatched your voting rights, drove away your elected representatives through an evil design have no right to seek votes from people.”

Just two days before the elections to 234 municipalities, she also urged people to resist together in a peaceful manner the ruling party’s plan to influence the municipal elections. “I call upon the country’s people to ensure the victory of our candidates by giving your votes in favour of the sheaf of paddy to restore your rights and democracy.”

She alleged that the Election Commission was not sincere in creating a level-playing field for all candidates. “It’s been clearly manifested as all the preparations are being completed to make the election a farce.”

Referring to a Jatiya Party chief HM Ershad’s remark that the municipal election will be concluded by 9am on December 30 and a minister’s comment that BNP’s defeat has been confirmed before the polls, Khaleda said these statements also exposed the government’s plan to make the election a mockery.

She questioned as to why the Commission is reluctant about deploying army. “The deployment of army has now become inevitable… we again demand army deployment for the municipal polls.”

In her-30-miniute written speech at the press conference, Khaleda also depicted the country’s current situation and the government misdeeds, repressive acts and corruption’.

She, however, did not take any question from journalists.

Apart from ruling party cadres, the BNP chief said, a group of law enforcers are being used in carrying out various misdeeds in the election areas.

She said ruling party ministers and MPs are desperately violating the election code of conduct while terrorists are brandishing arms in the election areas to terrorise voters. “But, no action is taken against them. The EC occasionally issues some show-cause notices as mere eyewash.”

Khaleda also criticised the Commission for seeking the Prime Minister’s help for checking election code violation by the ruling party men and said through this the EC has exposed its inability and helplessness in holding a fair election.

The former Prime Minister hailed the journalists for efficiently and presenting before the nation the ruling party’s terrorism, capturing of voting centres, vote rigging and other irregularities in the past elections.

She called upon the media men to play a courageous role in the municipal polls in presenting the fact.