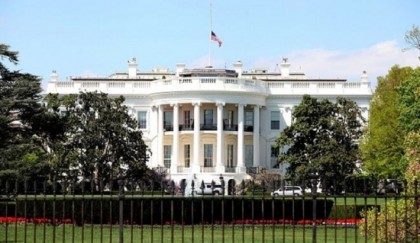 In Florida, state police dispersed an unauthorised gathering of hundreds of people in Daytona Beach on Saturday

China’s foreign ministry on Monday expresses “strong dissatisfaction” and “firm opposition” to the move as it defends the government’s crackdown in Xinjiang, saying that “counter-terrorism measures” are taken

He remained at the restaurant in the capital, Vienna, until after midnight

Indian Prime Minister Narendra Modi on Monday extended greetings on Eid-ul-Fitr, hoping that the special occasion furthers the spirit of compassion and harmony

The attackers fled after a gunfight with army troops, according to Anthony Mualushayi, a regional army spokesman

Pelosi last week referred to Trump as "morbidly obese" after he admitted to taking hydroxychloroquine, to ward off the coronavirus, which has been shown to cause heart problems

The "festival of the breaking of the fast" is one of Islam's two major holidays. It begins when the moon rises on the final day of Ramadan, a holy month of fasting

Israel's Netanyahu arrives at court for start of corruption trial

Trump golfs at his Virginia club amid the coronavirus pandemic

By CNN's count, Saturday's outing marked Trump's 357th visit to one of his properties and his 265th trips to one of his golf clubs during his presidency

As the Kingdom endures a nationwide lockdown to curb the spread of the coronavirus disease (COVID-19), many Saudis are refusing to allow the pandemic to break their spirits during Eid

Hong Kong security law must be imposed 'without slightest delay'

The proposal is expected to ban treason, subversion and sedition, and comes after Hong Kong was shaken by months of massive and sometimes violent anti-government protests

The fleet is carrying about 1.5 million barrels of gasoline according to media reports

That marked Kim’s first reported public appearance in more than 20 days, after he reappeared following an earlier three-week absence which triggered intense speculation about his health

US successfully tested a laser weapon

The South American country has now registered 330,890 infections and 21,048 deaths from the new coronavirus

The UAE, Iraq, Qatar and Jordan also came up with the same announcement

Germany allows religious services to resume on 4 May but worshippers must maintain a distance of 1.5m (5ft)

Salah Khashoggi, who lives in Saudi Arabia and has received financial compensation from the royal court over the killing, explained that forgiveness was extended to the killers