Akard's departure comes just as his office finalizes a report on Pompeo's controversial decision to bypass Congress to sell $8.1 billion in arms to Saudi Arabia and other Arab allies 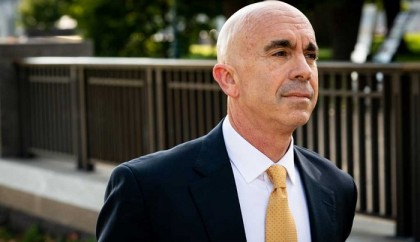 It set out hopes for a free trade deal with Brussels, but warned it could walk away without one if a "broad outline" of an agreement has not emerged by June

An uneasy calm has descended over the affected northeast fringes of the Indian capital, punctuated by sporadic outbreaks of violence overnight

Japan to close all schools to control spread of virus

India says US politicizing religious riots in which 34 died

Delhi woman, 85, trapped as mob set her home on fire

Cussler is the prolific writer of more than 80 books, mainly fast-paced action thrillers such as “Sahara” and “Raise the Titanic!”, which collectively sold tens of millions of copies

A viral outbreak that began in China  infects more than 82,000 people globally

The death toll now stands at 2,744 in mainland China, according to the National Health Commission

Justice S Muralidhar said, "We cannot let another 1984-like event happen in this country" and asked the government to work together to combat unrelenting violence

In addition, travellers from Kuwait and Bahrain are banned from entering Iraq until further notice, the statement added

Five killed at brewery in another US mass shooting

Trump’s comments, at a press conference on the new coronavirus, are the first official word on the toll in the latest spasm of America’s gun violence epidemic

The clashes, which also left more than 200 injured, were triggered by protests against a citizenship law

After more than three days of unprecedented violence in northeast Delhi, in which 24 people have died

The Congress said it is gravely concerned over the unprecedented continuing violence and loss of lives in Delhi, and the deteriorating situation in the national capital

The first victim is an 80-year-old Chinese tourist, who died in hospital in mid-February

An Intelligence Bureau (IB) officer was killed in Northeast Delhi

"Javed was travelling with a police guard when two gunmen opened fire on his vehicle. He died on the spot," senior police official Muhammad Ijaz Khan says

"I appeal to my sisters and brothers of Delhi to maintain peace and brotherhood at all times. It is important that there is calm and normalcy is restored at the earliest," Modi tweets

While India seems to love Trump, reality isn't so simple

For India, good relations with the U.S. are deeply important: They signal that India is a serious global player

The country's fertility rate dropped to 0.92, the second consecutive year it was under one, and far below the 2.1 needed to keep a population stable

A viral outbreak that began in China has infected more than 80,000 people globally