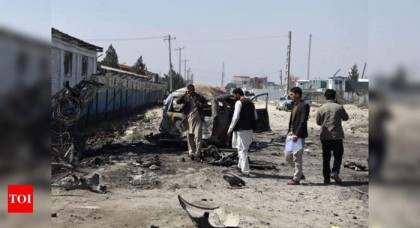 Videos of police brutality during protests shock US

George Floyd's killing, also captured on video, has caused outrage and sparked a wave of protests against racial discrimination and police treatment of African Americans in cities across the US and the world

Zarif throws ball back in Trump's court on nuclear deal

For Traore's family, the Floyd protests have also revived their hopes for change

3 Chinese nationals sentenced to prison for taking photos at Florida

Chinese national Liao Lyuyou, 27, was sentenced to 12 months in prison after pleading guilty

St John’s Episcopal church is across the street from Lafayette Park, which faces the White House and has been the focus of protests in Washington

We must care for nature:UN chief

The suspected attacker, a 35-year-old man, was arrested shortly after the incident late Thursday in Fujian province

Meghan Markle, the wife of Prince Harry, paid tribute Thursday to George Floyd as protests over his death in police custody

India pledged to investigate Thursday the death of a pregnant elephant that ate explosives-filled fruit,

George Floyd tested positive for the novel coronavirus in a test taken after his death, according to Hennepin County’s new autopsy report

The plant is owned by a subsidiary of Norilsk Nickel, which is the world's leading nickel and palladium producer

Mattis, who resigned in December 2018 over Trump’s ordering of a full troop withdrawal from Syria

Almost 5,000 people living in two villages near the plant in the Bharuch district of Gujarat state are evacuated as a precaution after a storage tank exploded, local official says

Iranian scientist freed from US custody returns to Iran

Asgari, 59, who has been cleared by US judicial authorities, fell into the arms of his relatives on his arrival at Tehran's international airport, images broadcast by several Iranian media show

US defense chief opposes use of Insurrection Act to quell unrest

The toll was separately confirmed by a source in the United Nations' peacekeeping force, MONUSCO

Gujarat has shifted over 50,000 people from low-lying areas in coastal districts

London City Airport to reopen at end of month

Domestic services are set to be the first to return, with international flights expected to follow in early July

De Blasio told reporters that a 8:00 pm to 5:00 am curfew, due to come into force Tuesday, would now run until Sunday

US protesters risk COVID-19 ‘for health of nation’

Sources says that one of the terrorists killed could be a so-call top commander of Jaish, who has been active in south Kashmir