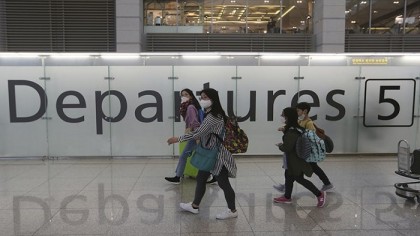 Mohsin Dawar, a lawmaker who is also a member of the group, confirmed Pashteen's arrest

The seven-day Spring Festival vacation, scheduled to end on Jan. 30, was extended to Feb. 2

Sokolo is the last town before the Mauritanian border, near a forest considered a base for groups linked to Al-Qaeda

In addition to 2,744 confirmed infections nationwide -- an increase of 769

Rockets hit near US embassy in Baghdad

The global spread of the coronavirus

In Hong Kong, six people are known to have the disease. Of those, five arrived via a newly built high-speed train terminal which connects with the mainland

On Friday, France's health ministry says three people who have recently travelled to China are confirmed to have contracted the virus -- the first cases in Europe

While mobile internet services in Kashmir Valley were suspended hours after their restoration on Saturday, phone connectivity was suspended in the early hours of Sunday

The blasts went off at two places in Dibrugarh district, about 424 km northeast of Dispur, the capital city of Assam

No one immediately claim responsibility of the attack on wedding party at eastern Khost province, which borders Pakistan

WHO calls for concerted efforts to fight infectious coronavirus

In a statement, WHO underscored that timely action is fundamental for early containment and noted that the first confirmed cases of coronavirus in Europe were not unexpected

Seventeen people are also missing, seven injured, and some 3,500 have been forced out of their homes following a series of landslides and building collapses

At least 15 people remained missing on the popular tourist island, according to the country's national disaster management office

Health Minister Fahrettin Koca says around 1,103 people have been injured

The world's most populous country scrambled to contain the disease that has already infected nearly 1,300 people

The government announced the final list of names for Padma Awards 2020 on Saturday, the eve of Republic Day. The Padma Vibhushan, which is awarded for exceptional and distinguished service, is the highest civilian award in India after the Bharat Ratna

The court was not persuaded. This past week, it ordered Myanmar to take all possible measures to prevent genocide against the Rohingya

Delta airlines fined for telling Muslim passengers to get off

2 killed, 20 injured in US warehouse explosion

The explosion happens inside a building at Watson Grinding and Manufacturing, which makes valves and provides thermal-spray coatings for equipment in various industries