Smith tormented India with his second blistering hundred in as many matches as Australia posted another huge target, reaching 389-4 off 50 overs 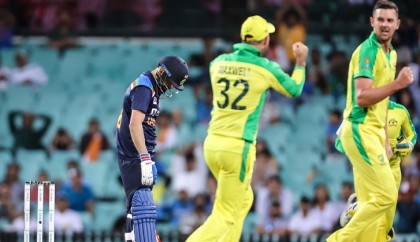 The winner will play India, who reached their first final after their clash against England is washed out earlier in the day

India through to T20 WC final after semifinal washout

Four-time champions Australia are scheduled to take on South Africa later in the second semi-final, with that match also under threat

Ronaldinho and his brother Roberto de Assi are detained after police raid their presidential suite at the Resort Yacht and Golf Club, around 15km south of Asuncion

Bangladesh are set to arrive in Karachi on March 29, and remain there till the end of the Test match

McKenzie helped me as much as he could: Tamim

The opener thanks the teammates and coach Neil McKenzie for keeping their faith in him despite his run of low scores, and adds that he is now more matured to handle pressure

The measure is announced as the Italian government stepped up its response to an epidemic that has killed 107 people and infected more than 3,000 others in Italy in the past two weeks

Malan, 23, is out for a first-ball duck on his ODI debut in the first match in Paarl on Saturday and is not selected in a 15-man squad which will depart on Sunday for a three-game tour of India

She suffered from post-traumatic stress disorder

In their 24th meeting with Mohammedan SC, it was the 11th victory for Abahani against Mohammedan’s five while the rest eight matches ended in draws

In the written statement, they criticized the present BFF President Kazi Salahuddin and his committee for his alleged failure to improve the country’s football and guide it in the right way

With this win, Bashundhara Kings moved up with ten points, equal with Saif Sporting Club

Equal prize money for men and women in England's Hundred

The IPL has been hailed as a commercial success since its debut in 2008, and has inspired similar Twenty20 leagues in other countries

Tokyo 2020 could be postponed to end of year

In a response to a question in Japan's parliament, Seiko Hashimoto says Tokyo's contract with the International Olympic Committee "calls for the Games to be held within 2020"

BCB to hold talks with PCB over coronavirus situation

Zimbabwe need to score six runs in the last ball, but they manage only one run off Al Amin Hossain who conceded 14 runs in the previous five balls of the last over

Since the 2019 World Cup, West Indies have lost 8 of their 11 played T20Is, and Sri Lanka themselves are coming from a whitewash at the hands of India in the same format

With this victory, Saif Sporting Club move up their tally with 10 points from four matches while all-losers Bangladesh Muktijoddha Sangsad Krira Chakra have one point playing three outings

Games could be held any time: Japan Olympic Minister

He surpasses the landmark of 7,000 ODI runs as the first Bangladeshi cricketer

Maxwell will play in at least the first eight fixtures of Lancashire’s campaign, before resuming international duty

Shakib amassed 1404 runs against Zimbabwe in 42 innings. Tamim crosses him in 40 innings

“They fully deserve the chance and I know it is risky to play them in this competition but they are worth a risk,” Arteta said of his young side