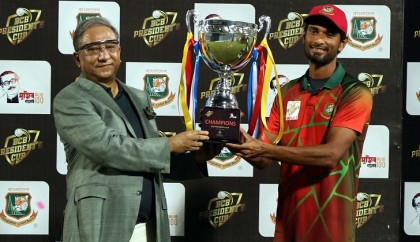 Soumya says ‘gaye holud’ ceremony will be held on February 26

Matar Fall, a defender, is fined 10,000 euros and banned for contributing to a loss by his team, Frejus-Saint-Raphael, in a French third-division match to gamblers who have still not been identified

Mahmudullah set to be dropped from Test squad

Napoli, who last won the trophy in 2014, now take a slim advantage into the second leg at their Stadio San Paolo on March 5

South Africa beat England by one run in T20 thriller

Kings President Imrul Hassan said, “BFF’s decision to reopen window is unfair and unethical. They reopened the window after 12 days of booters’ registration

Abahani out of AFC

In the day’s crucial match in Male, touring Dhaka Abahani and hosts Maziya SRC tried their best to score but failed and the result was enough for Maziya SRC to reach the qualification stage

WWE: The Rock's daughter will step into the ring

Simone Johnson, 18, has started training with WWE - following in the footsteps not just of her dad but her grandad, and her great-grandad too

Kapil, Azharuddin for strict action against 'unruly' India U-19 boys

On Tuesday, the International Cricket Council (ICC) sanctioned five players, including three from Bangladesh and two from India

The Pakistan Cricket Board has proposed BCB to play the series-concluding second Test in Karachi, beginning April 5, with pink ball and under lights

A KL Rahul century was not enough to save the tourists, who scored a respectable 296 for seven after losing the toss and being asked to bat

'Depressed' Pele becomes a recluse due to ill health

Pele has "a kind of depression" and is "embarrassed" by his deteriorating health, the soccer legend's son said

Williams to miss Bangladesh Test for his first child's birth

ICC to use no-ball technology for women’s World T20

Both Ronaldo and Ibrahimovic scores at the weekend in defeats as Juventus fell 2-1 at Hellas Verona, while AC Milan threw away a two-goal lead in a 4-2 defeat by city rivals Inter

Warner and Smith are both slapped with one-year bans for their roles in the ball-tampering scandal, while Cameron Bancroft was given nine months

India captain Virat Kohli is unfazed at losing the toss, saying he would have chosen to bat regardless

It’s painful to lose this way in Pakistan: Papon