Pakistan, already 1-0 down in a three-match series being played behind closed doors because of the coronavirus, resumed in trouble on 126-5 after winning the toss 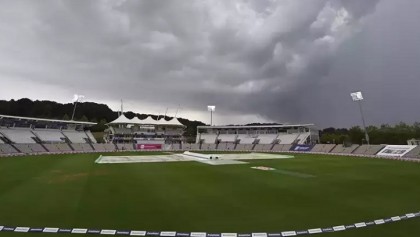 Knee injury ruled Afridi out of BBPL for one week

After sustaining the injury, he returned to Pakistan and may come back on January 6, if he recovers fully

“There’s no secret the SCG pitch is one of the more spin-friendly in Australia,” Stead says

The hosts were restricted to long-range efforts early on but De Bruyne, Rodrigo and Raheem Sterling were all unable to work goalkeeper Dean Henderson

'Tigers’ Pakistan tour to depend on security assessment'

“Whatever BCB decides, whether we send the team or not will depend on the security situation,” says the State Minister for Youth and Sports

In his video statement, Danish exposes the hypocrisy of people like Yousuf Yohana, who was compelled to convert to Islam by fellow players like Saeed Anwar, who has transformed into a hard-lined Islamist

Looking back on the year in sports

Bangladesh ended the year with its best-ever performance at the regional South Asian Games. The Bangladeshi athletes secured 19 gold medals in the 2019 edition of the Games held in Kathmandu in Nepal in December

“The effort from the bowlers throughout was something that is inspiring to us as a team, that never-give-up attitude”

It was the second heavy defeat for the Black Caps, who lost by 296 runs in Perth and will be playing for pride only in the final Test at Sydney later this week

Pellegrini is fired after the final whistle, with West Ham only a point and a place above the relegation zone having win just twice in 14 matches

Blundell made a dream Test debut against the West Indies in 2017 as an injury replacement for Watling, hitting an unbeaten 107

‘Gutted’ Murray out of ATP Cup and Australian Open

October saw Murray win the European Open in Antwerp, a victory that suggested he could still contend for major honours

Siddle will continue to play at domestic level, including for the Adelaide Strikers in the Big Bash League and Victoria in the Sheffield Shield

Mehidy ended on 87, which is now his best batting performance in T20, off 62 balls with nine fours and three sixes. Riding on this bat, Khulna Tigers scored 158 for two in 17.5 overs

England are 121 for one wicket at the close of play, needing another 255 runs to win

England survived a tricky short period at the start of their second innings and were 24 for no wicket at tea, needing another 352 to win

Clive Lloyd was the first prowler in the covers; a beautiful mover who could pick the ball up with one hand and throw it at the stumps

Soumya's 88 of 48 in vain as Rajshahi beat Cumilla

Rajshahi’s victory helped them attain 10 points and kept them in second spot with 10 points from six games, behind Chattogram Challengers who acquired 12 points in eight matches