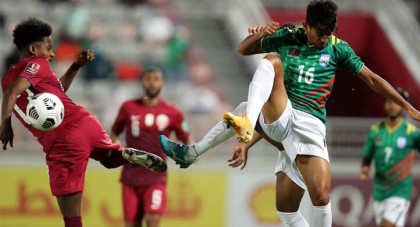 The England defender, 29 has apologised after the Sun newspaper reported that he invited two call girls to his flat on Tuesday

With every day that passes, there is a greater risk that entire clubs and companies could be forced out of business

Shakib unites with family after completing self-isolation in USA

In a video message during the self-isolation period, Shakib made an announcement to form a charity organization named "The Shakib Al Hasan Foundation"

Experts warn lockdown could come at 'psychological cost' to footballers

As a pandemic has swept around the world, video clips of famous footballers training at home have become widespread on social media

Speaking at his daily briefing, Newsom warned of a possible resurgence in infections if sport returned to soon

The world's richest cricket tournament has been postponed until April 15

‘Sporting activities to remain suspended till corona situation gets normal’

Earlier on March 16, the state minister at a meeting with officials of different federations at the secretariat came up with the declaration that all kinds of sporting activities will remain postponed till March 31 due to the coronavirus pandemic.

BCB expresses shock at the death of Tony Lewis

The Paris Saint-Germain star, the world's third-highest-paid footballer, donated part of the money to the United Nations Children's Fund (UNICEF)

Farah has no qualms over Tokyo Olympics delay

It is the first European league to take such a measure, although more could follow

According to the latest budget, the Games are due to cost $12.6 billion, shared between the organising committee, the government of Japan and Tokyo city

FIFA’s Infantino says ‘nobody knows’ when football can resume

TV money will go down, players and coaches will earn less

Expressions of interest will now be accepted until June 30, three months after the original deadline of March 31, the AFC said in a statement

With the Premier League suspends until at least April 30

“It is with much sadness that the ECB has learned of the passing of Tony Lewis MBE, aged 78,” said a statement

Proposed cuts will vary according to the employee’s job grade, ranging from 25 percent to 10 percent

Umar's destiny in his own hands: Coach Misbah

The Pakistan Cricket Board charged him under their anti-corruption code. His 14-day deadline to reply ends later Tuesday

When Bangladesh met Pakistan on their ODI debut

On Saturday, Prime Minister Narendra Modi creates Prime Minister's Citizen Assistance and Relief in Emergency Situations (PM-CARES) Fund and appealed to countrymen to show their support for the cause