Ahead of the most important match of the tournament, Mahmudullah XI brought up three changes to their side  Nazmul XI also made two changes 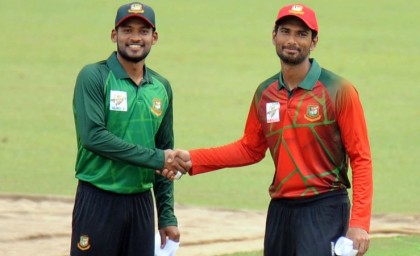 Messi failed to score on his first appearance at the Stadio San Paolo, where Napoli legend Diego Maradona reigned supreme three decades ago

National Football camp to be held in Dhaka, Sylhet

Rishabh Pant, Kuldeep Yadav, Shikhar Dhawan and Mohammed Shami are the other Indians named in the Asia XI team revealed by the BCB on Tuesday

Decision on Mashrafe’s ODI career in next BCB meeting

The BCB head had already made it clear that they would choose a captain, considering the 2023 World Cup

Zimbabwe 114 for five at lunch, Bangladesh close in on win

Zimbabwe need another 181 runs to avoid an innings defeat

Man City take fight to UEFA on and off the field

Buttler vows to prove worth on Test stage

Being sent to bat first, India managed to put up 142-6 after which their bowlers, led by leg-spinner Poonam Yadav restricted Bangladesh to 124-8

Mushfiq dedicates his 3rd Test double-century to his son

India in their first match beat hosts Australia by 17 runs

Messi restores peace at Barca; Madrid in slump before City

New Zealand knocked off the winning runs in just eight balls before lunch, finishing 9-0 with Tom Latham on 7 and Tom Blundell on 2

‘Not good enough’: No excuses from Kohli for India’s heavy defeat

Mominul, who was on 79 overnight, hit pacer Donald Tiripano a boundary at mid-off to complete his hundred off 157 balls as Bangladesh reached 300-3 in their first innings when the report was filed

Neymar sent off as PSG beat Bordeaux in seven-goal thriller

“He is human too and he was angry. The guy who fouled him just before was not even booked, so it was a bit bizarre,” said Tuchel of Neymar’s sending- off

“I think we will not get a response from India until Modi is in power. We have all understood his mindset now. His mindset can only take you towards negativity," Afridi says

At the end of the day two, Bangladesh reached 240-3, capping off another dominating day over the visitors

At the second interval of the day, Shanto was batting on 55 with skipper Mominul Haque on 17

Boult fired up as New Zealand have India on the ropes

Ajinkya Rahane was unbeaten on 25 with Hanuma Vihari on 15

Salma Khatun says Bangladesh are looking to reach the semi-finals for the first time, even though they are yet to win any match in this tournament in the previous two editions

Women’s Euro 2021 to kick off at Old Trafford

Bangladesh reaches 25-1 at lunch after dismissing Zim for 265