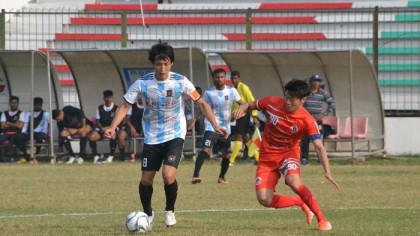 Engineer to Olympian: Quintero ready for karate in Tokyo

More than five years ago, one of Spain's most successful karate athletes was splitting his time between practice, graduate school and his day job

The popular tournament, which began in 2008, will run for 57 days -- six more days than the last edition

Lack of preparation for Tests due to poor scheduling: Coach

The Bangladesh head coach discusses his tenure, preparations, the Bangladesh pace unit and a lot more in an exclusive one-on-one with Cricbuzz

Moeen is currently taking time out from Test cricket, having made himself unavailable for England's tour of Sri Lanka next month

The German football club, Borussia Dortmund, is one of the first clubs demonstrating sympathy for Marega's action

Elsewhere DR Congo will play neighbours Congo in Group B alongside Libya and Niger, while in Group C holders Morocco face Togo, Rwanda and Uganda

Nagelsmann, 32, is 25 years younger than Mourinho and has a CV 25 trophies lighter than the Portuguese

Hamilton, 35, a six-time world champion and Barcelona star Messi, 32, share the award for their achievements in 2019

City were also fined 30 million euros ($32.5 million) and are taking the matter to the Court of Arbitration for Sport (CAS)

Guardiola to stick with City despite ban: reports

Guardiola, who has been at City for four years, told the players of his intention at a meeting on Saturday

‘Nothing to lose’ Lazio topple Inter to go second behind Juventus

Even after his debut two years ago, Patel’s thoughts are focused on one day playing India

As Cristiano Ronaldo and Lionel Messi approach the end of their careers, could Mbappe and Haaland be the next duo to dominate football

Tarafder Ruhul Amin not to compete in BFF election

Mahmudullah is given rest, not axed: Nannu

“This is an important victory,” said Atalanta coach Gianpiero Gasperini