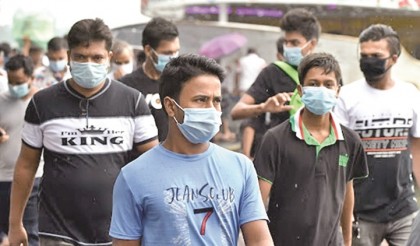 People’s curiosity about side effects of vaccine

The government has already made a priority list of vaccine recipients, arranged an online registration system and formed vaccination teams

Govt to set up special cyber team for FIs

Many policemen get addicted to drugs

Eighty  policemen of DMP have so far been detected as drug addicts in their dope tests, says Walid Hossain, deputy commissioner (DC-Media)

Due to the difficulties over HS code, the export of products are being hampered by the stipulated deadline of foreign buyers which ultimately is putting bad impact on export”, BGMEA says in the letter

During a recent audit, the health audit department has found 84 serious objections, out of 95 financial irregularities, in those hospitals

No risk even if any more bombs remain underground: Experts

Irregularities at hospitals, faking test certificates, illegal plasma donation and corruption in the purchase of protective gears and other medical kits also came to the fore amid the pandemic

The government has so far released 21 stimulus packages worth around Tk 1.21 trillion, which is 4.34 per cent of the GDP

During the pandemic, every country was in trouble in ensuring food security through imports but Bangladesh has been reflecting an opposite scenario with rising production of cereal

The country’s security forces have earned praise for ensuring social distancing, delivering food items from house to house and burying the bodies of the corona victims

The quantity and price of Covid-19 vaccines have not been mentioned in the proposal, according to Planning Commission sources

Patients mainly have to encounter dirty environment, including unhygienic washrooms, and nuisance of brokers at the department

Intelligence wings of law enforcement agencies have identified around 1,000 drug traders and 500 drug spots in the capital

Some 326, 758 migrants have come back home till November 30 after the corona pandemic started spreading worldwide

Foodgrain stock on the decline

The shortfall in the stock has led unscrupulous traders to hike prices of all kinds of rice across the country, adding woes to people

Several organised gangs are involved in the production of fake revenue stamps, judicial and non-judicial stamps and sell those to various places across the country

Child murders on the rise amid pandemic

37 Yaba factories along border in Myanmar

A staple shortage deepened after multiple natural disasters, also causing a rise in the price of rice in the local market and forcing the government to import rice

List of anti-liberation elements, including Razakars, Al-badr and Al-Shams, scheduled to be published before Victory Day is yet incomplete