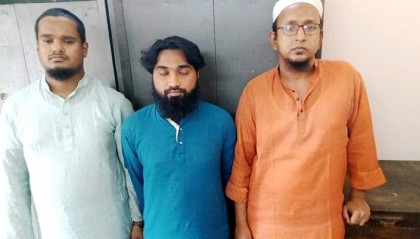 BNP hits back at AL leaders over corona comment

He breathes his last at Square Hospitals in the capital at around 1:20 pm while undergoing treatment

AL has no right to stay in power: Kader Siddique

Coronavirus issue not getting due govt attention: BNP

Not BNP-Jamaat, internal conflict is our main enemy: Parash

Gano Forum expels 4 of its leaders

“The government’s ongoing anti-corruption drive will continue unless the target is fulfilled,” the AL general secretary says

“We will hold the rally in all district towns and divisional cities, including Dhaka city, on Saturday," says BNP senior Joint Secretary General Ruhul Kabir Rizvi

AL has courage to punish own leaders for crimes: Quader

We’ll surely take steps for a fair trial of the incident though a neutral investigation if we can get back to power,” the BNP Secretary General says

He made the observation in an interactive session with students following the re-screening of the docudrama ‘Hasina: A Daughter’s Tale’

Being panicked by the gun attack, a sexagenarian man who witnessed the incident died of cardiac arrest

Five family members of BNP chief Khaleda Zia, including her younger brother Shamim Iskander, arrive at the hospital at around 3:00 pm

A press release, signed by BNP assistant office secretary Muhammad Munir Hossain, has been issued in this regard on Friday

No justice, rule of law in country now: Fakhrul