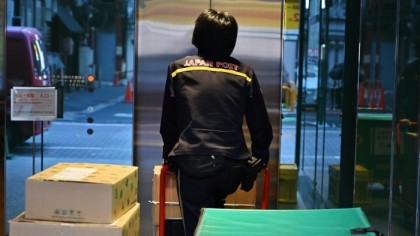 Couple spend over 18 lacs in court over pet cat

Jackie Hall and her husband John turn sleuths when their grey and white Maine Coon, Ozzy, began spending long periods away from home in west London

When social media users saw pictures uploaded to the popular Sina Weibo microblog by Lu on 17 January, inside the empty site on a clear day, people quickly started asking questions

Baby mauled to death by dogs at operation theatre

Amazon package had dirty diapers in it

Yusaku Maezawa, who recently announced his break-up with a Japanese actress, is accepting applications from “single women aged 20 or over” who want to enjoy life to the fullest

The female cow that was reportedly pregnant, bent both her front legs and refused to walk, apparently with tears in her eyes

The girls immediately applied base makeup, eyebrows, blusher, eye shadow, and eyeliner, and even nail polish with earrings in hospital bed

Food 'made from air' could compete with soya

More than 10,000 camels to be killed in Australia

About 1,000 locals and holidaymakers spend several hours comforting the beached whales on the Coromandel Peninsula in the North Island.

Bkash scammers tricked a tea seller into sending them Tk 65,000 on Thursday night

The suspect was arrested for tampering with physical evidence

Couple fall in love at old age home, get married

During the inauguration of Rashtriya Adivasi Nritya Mahotsav, Congress leader Rahul Gandhi was seen dancing with the tribals

67 ft Christmas tree in Mumbai is powered by Alexa

The setup is made magical by Alexa, a voice assistant that comes with Amazon Echo smart speakers

Handicapped kids buried up to neck during solar eclipse

Thanks to reinforced glass, the little boy was spared when the hungry wildcat pounded on him with full might

"He robbed the bank, came out, threw the money all over the place," witness Dion Pascale tells CBS Colorado Springs affiliate KKTV

A man was arrested in Colorado Springs on Monday after he robbed a bank and threw money in the air, shouting ‘Merry Christmas’