In response to CNA queries, an MHA spokesperson said Faysal was proficient in English and adept at using social media 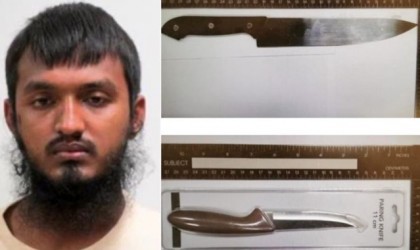 Hanif calls for unity against evil politics of BNP-Jamaat

Due to heavy rainfall, landslide may occur at many places in the hilly areas of Chittagong division

2 held with bombs at Mourning Day programme venue in Chuadanga

The government will execute the trial of all these killers, including Noor Chowdhury, after bringing them back to the country, Home Minister says

Due to heavy and very heavy rainfall landslide may at places over the hilly regions of Chittagong division, Met office source says

According to sources, the water level of the river is flowing 133cm above the danger level

The culprits in the murder could not be tried due to weakness in the investigation process, SK Sinha says

They are now staying at the houses, open space and on the roods in two unions of the upazilas

So far, nine people drowned in floodwaters in the last three days in the district

Accompanied by Sheikh Rehana, the premier offers munajat seeking eternal peace of the departed souls of the architect of the independence

The deceased is identified as Saiful Islam, a former member of Chhatra Shibir, hailing from Dumuria upazila in Khulna

The national flag is kept half-mast at all government, semi-government and autonomous bodies, educational institutions and Bangladesh missions abroad

A team of police cordoned off Hotel Olio International near Square Hospitals around 4:00am

After placing wreaths, the President and the Prime Minister stood in solemn silence for sometime showing respect to the great leader

No celebration on Khaleda’s 73rd birthday

In last year, the party celebrates Khaleda Zia’s 72nd birthday through holding a doa mahfil instead of cutting any cake

PM goes to Tungipara Tuesday to pay homage to Bangabandhu

4G service can be ensured within two months: Tarana Halim

She says BTCL is working to improve the Internet speed

The minister reveals that passports of 15,000 hajj pilgrims are yet to be submitted for visa and 16 hajj agencies have not sent a single pilgrims

Remain alert about division in the name of religion: President

Hindu religious personalities, leaders of the community and people of various professions from the community join the reception at Bangabhaban

The EC has sent letters to the political parties informing the EC’s decision, says an official at the EC Secretariat

Govt out to stage drama over 16th amendment verdict: Fakhrul

The killing of Bangabandhu and most of his family members on the fateful night of August 15, 1975 is the ugliest chapter of the nation's history