As part of the government move to relocate Rohingyas to Bhashan char, a delegation of Rohingya leaders 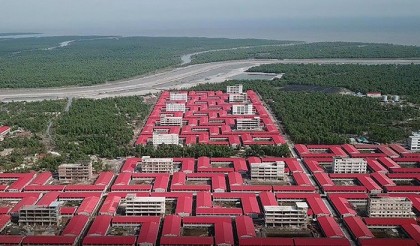 Work together for sustainable development: President

The President, who is now on a five-day visit to Kishoreganj, held the view-exchange meeting with local leaders and other personalities of Itna upazil

The deceased has been identified as Malek Abdul, 45, son of Shawkat Ali Bepari of Dakkhin Islampur

All authorised agencies ‘can send workers to Malaysia’

Nurul Islam led a five-member Bangladesh side to the meeting, says a handout of the Expatriates’ Welfare and Overseas Employment Ministry

BNP to take to the streets from October 1

“We won’t give the government any chance this time to score in an empty field. We won’t allow this regime to go unchallenged,” Moudud Says

Home loan with 5pc interest for govt employees from Oct 1

In presence of Finance Minister AMA Muhith, the Sonali, Agrani, Janata, and Rupali Bank signed the MoU with BHBFC

The peace summit was organised on the occasion of the 100th birth anniversary of Nelson Mandela, a South African anti-apartheid revolutionary leader

2 suspended over separating newborn into 3 pieces in Cumilla

Independence museum must for every dist: Sayem Sobhan

DSCC Mayor Sayeed Khokon came up with the announcement at a press conference in the city on Tuesday afternoon.

PM woos US entrepreneurs to invest in Bangladesh

The Prime Minister makes the call while addressing a luncheon roundtable meeting with the U.S. Chamber of Commerce

Five killed as truck rams into crowd in Chattogram

Outgoing mayor of KCC, Moniruzzaman Mony will hand over charge to Khaleque this afternoon at Shaheed Altaf auditorium

Currently, highway connectivity to the northeastern states is patchy and transportation of goods by road entails a high cost and takes time

80 percent work of the project have already been completed, and the rest of work will be done within next one and a half months

Her second recommendation is Myanmar must create conducive environment by building trust and guaranteeing protection, rights