The deceased is identified as Naimul, 16, hailed from Tangail. He used to live with his family in Brussels 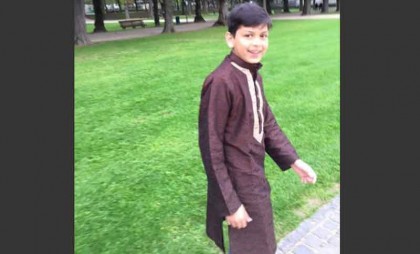 Rubel was killed in a room of Hotel Shah Kamal in Old Dhaka on June 6, 2010. His body was later hidden somewhere else

Earlier on Sunday night, Maksud Ahmed, a leader of Gopibagh Ward unit of the ruling party, filed a lawsuit against 50 BNP activists over the clash, which left 15 people of the both sides injured

Husband hacks wife to death over her ‘extramarital affair’

The deceased is identified as Shahina Akter, 27, daughter of late Ibrahim of Teluniapara of Lama upazila and wife of accused Md Zakir Hossain

However, there was no report of casualty

Seven people, including an Awami League leader, were arrested on Sunday for allegedly cutting off the hair of a housewife

The identities of the arrestees can't be known immediately

Auto-rickshaw snatched after killing its driver in Gazipur

The deceased is identified as Rassel Chowkidar, 25, son of Md Ratan Chowkidar, hailing from Hayedrabad area in the Gazipur

She carries a child, and guards a dark secret

All pensioners to come under online payment system

Of the pensioners, 0.126 million were brought under the online payment system by December last year. First and second class officials were the beneficiaries of the system

Factories must set up ETPs to fight pollution: Minister

Legal action will be taken against polluting factories that are operating without ETPs, the minister also says during a meeting with the National River Conservation Commission

"No bar to use EVMs in Dhaka city polls"

Barrister Dr Md Yeasin Khan, who argues for the Election Commission, says now there is no barrier to the use of EVMs in the city polls scheduled for February 1

Earlier on November 24, the Supreme Court asked GP to pay Tk 2,000 crore of the Tk 12,579.95 crore dues claimed by BTRC as an adjustable deposit within 3 months

The detectives also seize one private car, three motorcycles, one pistol with one magazine, five jackets of DMP DB, a DMP police sergeant’s uniform and a DMP police constable’s shirt

Md Shanto, assistant organising secretary of Wari Thana unit of the BNP’ labour wing, has been admitted to the emergency department of Dhaka Medical College Hospital

Clash between AL, BNP men is not expected: Dickson

“We want to see holding of free and fair election so that people can exercise their franchise going to the polling centres,” Robert Chatterton Dickson says

The migrant workers who will return to their countries under the Special Exit Programme will be able to go to Saudi Arabia after receiving valid visas,says Momen

‘Khaleda being treated with utmost sincerity’

All previous information and statements regarding Khaleda Zia’s treatment released or aired in media were media’s individual perception; there is no connection between media and medical board’s statements, the release says

Bus movement on Dhaka-Sylhet Highway will remain suspended from Monday morning as the strike is set to start from 6:00 am

The AL mayoral candidate pledged of building cultural and service centers having help desk, training facilities, start-up co-working space, library and other facilities for the youths at localities

Locals said a portion of a wall of a house, owned by Haji Bullet, collapsed on four people while they were walking on the road, leaving them severely injured

SC orders to dispose of HC rule against 9th wage board

The apex court on August 20, 2019, stayed for eight weeks the High Court order that had imposed the status quo

Coronavirus: Decision on ban on travel to China Tuesday

Law, Justice and Parliamentary Affairs Minister Anisul Huq moved the bill and it was passed by voice vote

BNP has a permanent representative to EC: Quader