Reign says this is something studios have shown themselves incapable, or unwilling, to do

Reem Shaikh is cast as Malala

Shah Rukh decides on his next as a producer

According to a report, the actor is backing a film on the struggle of character actors in Bollywood titled Kaamyaab

Priyanka made a splashy appearance at the 2020 Grammys on January 26, where her husband, Nick Jonas, performed with the Jonas Brothers

Madonna resumes her world tour in London after injury

Purnima to act as Bangamata

Kangana Ranaut and Karan Johar, once very public enemies (or seen to be such), are receiving the Padma Shri in the same year

Is it justifiable to enforce a flight ban on a comedian who heckles a popular news presenter on a flight?

There is no evidence of whether the phone was given back to the fan or that Salman apologized (that’s asking for too much!!) for his rash behaviour

Saif Ali Khan: A star in Bollywood — and on Netflix

Priyanka Chopra to join the cast of Matrix 4

The film will be helmed by Lana Wachowski, one half of the Wachowskis, who directed all three films in the sci-fi action franchise with sister Lilly

Later in the festival, Dia Mirza shares that she was also overwhelmed by the death of basketball legend Kobe Bryant

King Khan back to work

The film is a period film, as the first two ships landed at then British Guyana, now known as Guyana

Deepika to star in The Intern remake with Rishi Kapoor

She will step into Anne Hathaway’s shoes in the remake, while Rishi Kapoor will play the role originally essayed by Robert De Niro

Akshay Kumar has the release of his upcoming film Bachchan Pandey, which was scheduled for December 25, to which Aamir tweeted a 'thank you'

Amit Hasan wants to reunite Shakib-Apu in his film

According to Amit Hassan’s exposure, the pair will be reunited on screen in future

America’s first black first lady also dug into her personal life in her book, expounding on issues including a miscarriage, using in-vitro fertilization to conceive her daughters and marriage counseling

Billie Eilish is the big winner at the Grammys

Pop star Billie Eilish swept the board at the 2020 Grammys, winning five awards, including best new artist and song of the year 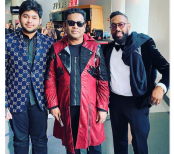 AR Rahman at the Grammys with son Ameen

The best performances from the 2020 Grammys

The win comes more than two decades after Mendes first received the DGA award for "American Beauty," a victory that led to Oscars wins for that film

‘I am Muslim, my wife is Hindu and my kids are Hindustan’:Shah Rukh

Shah Rukh says, “I’m not religious in terms of saying prayer five times but I am Islamic"