Priyanka Chopra took to Twitter to share a sweet birthday wish for her cousin Parineeti Chopra. She shared a photo from her wedding and said that she missed Parineeti a lot 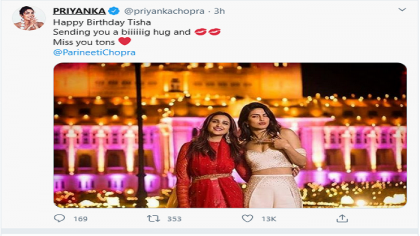 Natalie starrer Lucy in the Sky to release Oct 4

The 71st edition of Primetime Emmy Awards will not have a host, Fox has confirmed, reports The Indian…

I don't care about getting older anymore: Salma Hayek

Angelina wants the world to have more "wicked women"

More than 30,000 people have been infected with dengue virus since January 1

Beijing sees Taiwan as part of its territory awaiting unification, even though the two sides have been ruled separately since the end of a civil war in 1949

Ben Affleck starrer The Way Back to release in March 2020

Ben Affleck’s next film The Way Back has been delayed by five months. The sports drama, which…

SRK to be felicitated at Indian Film Festival of Melbourne

Cox who is also transgender, posted on one of Sampaio’s photos: Wow finally

Kashmir shooting of Bollywood films likely to be postponed

The government also announced its decision to split the region into that two Union territories -- Jammu and Kashmir, which will have a legislature, and Ladakh, which will be without a legislature

Azmi will be seen playing Admiral Margaret Parangosky, the head of the Office of Naval Intelligence

Bollywood’s reactions on Article 370 of Kashmir

Several Bollywood celebrities such as Dia Mirza, Kangana Ranaut and Anupam Kher have taken to social media to react to the decision of the PM Narendra Modi government to repeal Article 370 of the Constitution

Rakhi Sawant is married to this NRI man

Rakhi has been sharing pictures and videos in which she is seen adorning henna, vermillion, all suggestive of her being married since July

Dhaka University introduced ‘Feroza Begum Memorial Gold Medal’ since 2016 in paying respect to the life and work of the artiste. The jury board selects a nationally recognised music artiste every year for the award

I was lucky to be in right place at right time: DiCaprio

Hobbs & Shaw' knocks off 'Lion King' from the top

"The Lion King" earned $38.2 million for second place, topping director Quentin Tarantino's "Once Upon A Time In Hollywood," which has earned rave reviews and took in $20 million for third place

The function was organized by Dhaka University’s “Feroza Begum Memorial Gold Medal Trust Fund,” to mark the 93rd birthday of the singer

Adoption was not an act of charity but wisest decision:Sushmita

Arjun, who was last seen in Raj Kumar Gupta’s India’s Most Wanted, has been working on Ashutosh Gowarikar’s Panipat

Pennebaker, who received an honorary Academy Award in 2013, died of natural causes at his home in Long Island, his son, Frazer Pennebaker said in an email

The BJP MP was seen dressed in classical Bharatanatyam attire

However, the Judgementall Hai Kya writer categorically denies these reports, calling it “utter rubbish”. “It is so disturbing to wake up to such news

The singer and entertainer died this morning in his husband Jamie Moran's arms, surrounded by his family

She has shared picture on |Instagram of enjoying her honeymoon with husband and Nikhil, and also celebrating Sindhara Dooj

The singer, 52, was denied bail on the grounds that he was a flight risk

Aayush plays a police officer in the action-drama film, Kwatha

Not just this, the actor, through his platform, has given space to 11 immensely talented child dancers to showcase their dancing skills

Bhasha Mukherjee, 23, from Derby, holds two different medical degrees, has an IQ of 146, making her officially a ‘genius’ and is fluent in five languages, reports The Daily Mail