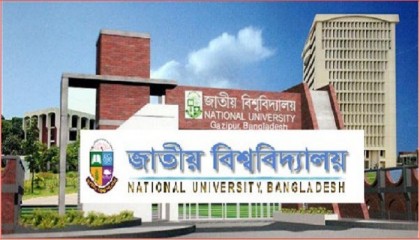 Voting in DUCSU polls on Monday

The DU authorities have already chalked out necessary steps to ensure a free and fair election, which is seemed to be a competitive one

Shahana Akthar Emu, a second year student of Sociology of Jagannath University in Dhaka, has been diagnosed with a rare GBS virus

The selected students were asked to complete their admission process by March 19, 2019

Students of a government primary school in Kachua upazila, Chandpur have been attending classes under the open sky for the last few weeks

The Islamic University (IU) in Kushtia suspended a section officer for violating the university’s rules and regulations on Tuesday.

he told a briefing on the Ducsu polls at Nabab Nawab Ali Chowdhury Senate Bhaban of the university.

The much-awaited election is going to be held on March 11 after 29 years. The final voter list is now available on the Ducsu website: ducsu.du.ac.bd

JUST Vice-chancellor Prof Dr Md Anwar Hossain, however, did not accept the resignation letters saying those were not submitted through proper channel

The university authorities have suspended two employees over the incident

According to the press release, all the activities of BCL on the campus will remain suspended

The summit with the theme "CEOs of Future" will be held at Nawab Ali Chowdhury Senate Bhavan, University of Dhaka on March 9

Earlier on January 23, the DU authorities hinted that polls will be held on March 11 to elect DUCSU office-bearers for one-year term