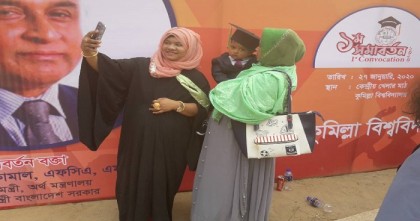 The deceased is identified as Abir Ahmed, 15, a tenth-grade student at Wari High School

Muhammad Samad is an eminent and popular poet of Bengali literature

Students of different schools, colleges and universities took part at their respective events at the fair

A notice, signed by registrar of the university Dr Swadesh Chandra Samanta, was issued in this regard on Thursday evening

DU to confer Doctor of Laws on Bangabandhu

According to the circular, school-level and college-level preliminary tests are scheduled to be held at 9:00 am and 3:00 pm respectively on May 15

Uniform entry test in public universities from next year

20 arrested after BCL infighting at CU

Earlier on Wednesday, four activists are injured in infighting between the activists of two shuttle train compartment-based groups -- Bijoy Group and CFC Group -- on the campus, according to police

“I want expulsion of those who assaulted us. I’ll continue my protest until my demands are met,” tortured Mukim Chowdhury says

They also sought exemplary punishment of the attackers

Sixth CUMUN in the offing

The agenda of UN Security Council-the legalization of individual-owned military organisations in the conflict zone, the agenda of Arctic Council- Resolving disputes among stakeholders

The BCL leaders allegedly beat up the students indiscriminately with iron rods, bamboo sticks and stumps suspecting them activists of Islami Chhatra Shibir

DU VC urges students to pay respect to others

The VC hoped that they would overcome all challenges including financial one and be successful in their future life. The university authorities will provide all out support and cooperation to the students in this regard, he assured

The suspended students are Nasir Uddin, Mobassher Hossain, Shamim Reza and Safaetul Islam and they are honours final-year students of the university’s separate departments

The examination is rescheduled due to unavoidable reason

Nurul Haque Nur posts a Facebook status, where he writes: “The countrymen will ever remember Ziaur Rahman for his contribution to the Great Liberation War”

A total 2,888 students have completed their registration to attend the convocation. Among them, 14 students will be awarded gold medals

Pranab Chowdhury, officer-in-charge of Khulshi Police Station, says a police patrol team chased Jahed and his followers after they attacked police and hurled brickbats in the area around 11:30pm

Triogm, a global platform, announces it in its official Facebook page and Mehedi will work to promote Triogm activities in Bangladesh