The accident takes place when the jeep collides with the CNG in the area around 7 pm, leaving the trio dead on the spot, says Md Ruhul Amin, officer-in-charge of Chandraganj police station 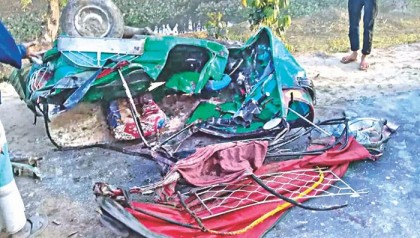 The deceased are identified as Julekha Khatun, 24, seven months pregnant wife of Al Mamum, and their four-year-old daughter Amena

Hefazat-e-Islami arranged the rally in demand of declaring Qadiyanis non-Muslim. Maulana Ahmad Shafi joined the rally at around 3:00 pm. But the stage broke down at around 4:45 pm

The arrestee is identified as Bulbul Islam Samrat, son of Kechu Mia of the upazila

Law enforcers recover the body of Abul Kashem, 50, from Railway Colony of Bhairab Municipality area at around 7:00 am today

Four months back, the woman was found abandoned at the entrance of the hospital and then admitted to the hospital by a senior staff nurse, Chameli Begum

Dr Sadar Uddin, Administrator of Tangail General Hospital says a three-member probe body was formed to examine the victims and after primarily tests the doctors found evidence of rape

The deceased is identified as Shahriar Mahmud Shamsh Uddin alias Shamu, 20, son of Nuru Samad, hailing from the area

Quoting family members, officer-in-charge of Sadar Police Station Alamgir Bhuiyan said Akhi returned home from Jordan one week ago due to her illness

Anwarul Haque, Commander of Fire Service Dhaka-4 (Savar, Ashulia, Dhamrai) Zone tells media that the fire is under control but not doused completely. Smokes have been coming out of the shops

Judge Md Zakir Hossain of Feni Senior Judicial Magistrate Court-2 handed down the verdict in presence of the convict. The court also fined him Tk 1,000

The identities of the deceased could not be known immediately

The deceased are identified as Yusuf Ali, 45 and Abdul Jalil, 33, sons of Haran Haji of Sanandabari Lambapara village in Dewanganj upazila

The robbers will deposit some 150 firearms, 2,000 bombs and sharp weapons to the administration during their surrender

The deceased are identified as Rasel Hossain, 23 and Saddam Hossain, 24, both of them hailed from Biara village of the upazila

The injured workers are sent to Dhaka for better treatment

The deceased is identified as Zakir Hossain Falu, 35, son of late Abdul Mannan of Madarkandi village in the Burudia union of the upazila

The deceased are identified as Harun, 22, Javed Hossain, 20, and Tipu 20, all are from Alipur of Begumganj

Twenty Hijra families of the locality have been rehabilitated in this cluster village built on 0.92 acres of land costing Tk 3 lakh 35 thousand. Forty more Hijra families will be resettled in this village later

According to the prosecution, Aminur took the six girls to his employer's house at different times from January last and raped them

The victim is Sohel Mahmud, vice-president of the city unit of BCL

The constable is identified as Arif Hossain, 25, hailed from Munshiganj district and was appointed in Narayanganj Police Lines