The identities of the deceased can not be known yet 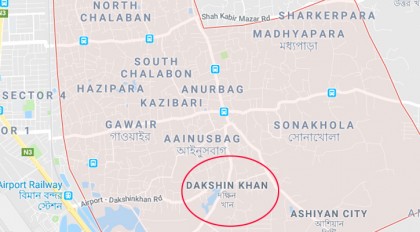 The city had a score of 152 at 08:08am, indicating that the air quality was ‘unhealthy’

Ward councilors distributed foods among 18,000 families so far at their individual initiatives

The city had a score of 164 at 08:01am, indicating that the air quality was ‘unhealthy’

The deceased are identified as Mosharraf Hossain, his wife Hosna Akhter, and their daughter Mohini Akhter, hailing from Gobindapur village under Pirganj upazila in Rangpur

The DMP started its germicide spraying activities on March 25

Though there is a government directive to use safety equipment to prevent the spread of the coronavirus, the cleaners are seen working without those

The injured were identified as Jakir Hossain, 45, his wife Rina Begum, 40, and their son Jihad 17

The deceased is identified as Suria Begum, 45

3 of a family burnt to death in city fire

The deceased are identified as Kolpona, 35, Jannat, 13 and Kauser, 8

The city had a score of 164 at 08:49am, indicating that the air quality was unhealthy

Only a few people were seen at kitchen markets, food shops, pharmacies, hospitals as all these emergency services have been kept out of the purview of the general holidays

Ride-sharing services off from Thursday

The operators of the services have taken the decision to comply with a directive from Bangladesh Road Transport Authority (BRTA). The services will remain suspended till April 04

‘Misinformation being spread over death of Mirpur resident’

The son, an officer of a private bank, informed a Bangla daily that he has given a status on his Facebook page over death of his father to know the actual fact

The commission takes the decision amid coronavirus outbreak today

No quarantine centre at Uttara: Residents

A child was also seen holding a placard which reads: ‘Honorable PM, save us from corona’

The deceased is identified as Monir Hossain, 19, son of Habibur Rahman, resident of Poschim Shimulbari village under Jaldhaka upazila of Nilphamari

Police recover the decomposed body from the house, owned by a Abul Hashem Khan, in Tekergoli near Gandaria Fire Station

Fire breaks out at Mohakhali building

They also recovered arms and mugged goods from their possession

The Inter-Services Public Relations (ISPR) confirms the matter to media

Shafiqur Rahman, who was also the former Mayor of the municipality, dies of cardiac arrest at his residence this morning

The arrestee is identified as Nazir Hossain, 25, teacher of a local Maktab in Kalshi area in the capital’s Pallabi

On information, 25 firefighting units rush to the spot and are trying to douse the blaze

The air is classified as ‘unhealthy’

'Denial of March 7 tantamount to denial of independence'