Different exhibits made Hasina relive memories of the related incidents

Abdul Jabbar was appointed deputy commander of Bangladesh Liberation Force at Moulvibazar subsector. He participated in the frontline fight in different war-fields

As many as 2,194 books hit the Amar Ekushey Book Fair in the last 14 days till Saturday

DAS sees huge crowd thanks to the festivities of February 14

Nadeem Qadir is currently the Consulting Editor of the Daily Sun, one of the leading English dailies of Bangladesh

A total of 1,136 new books have been released in this year’s Ekushey book fair so far 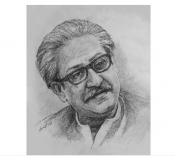 Besides, Bangladesh has been made the theme country

A group of people has defaced a laneway in the Australian city of Melbourne, spraying paint over its world-renowned street art

State Minister for the Ministry of Power, Energy, and Mineral Resources Mr Nasrul Hamid attended the opening ceremony as the chief guest

The kids were seen to be delighted to shake their hands with their favorite character of Sisimpur Halum, Ikri and Tuktuki

Thousands of people of all ages, particularly the youth and children, flocked different stalls and pavilions to find out books

The theme of this year is: ‘Standard use of Sign Language is the right of persons with hearing impairment’

Director Mendes based "1917" on his grandfather's wartime experiences. Shot in sinuous long takes that immerse viewers in the action, it follows two British soldiers on a perilous mission across

Prime Minister Sheikh Hasina, also the daughter of the Father of the Nation, has unveiled the cover of the 3rd autobiography of the greatest Bangalee of all the times

This year Bangla Academy has set the theme of the fair as “Birth Centenary of Bangabandhu” and the book fair will be dedicated to the iconic leader, marking his birth centenary

Producing drama in spirit of War of Liberation stressed

Theatre personalities have stressed writing, producing and stating dramas in light with spirit of the War of Liberation