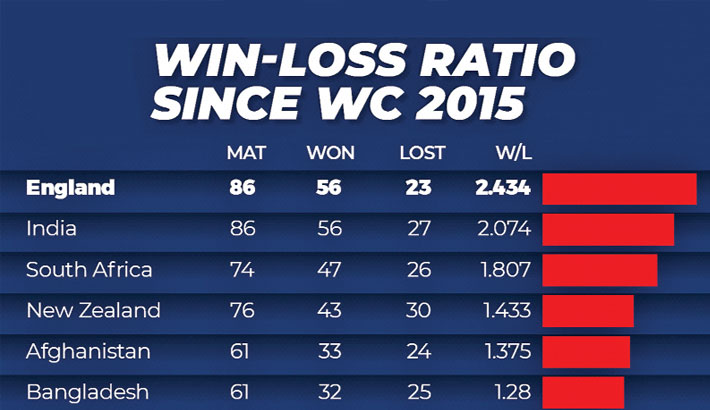 More than 2.2 billion people will be gearing up for a certain special event come this May 30. This special occasion is bestowed upon us every four years. By now you must have realised that we talking about ICC Cricket World Cup 2019 and the grand festival of cricket starts in a few days.

The format for the tournament will be a single group of 10 teams, with each team playing the other nine once, and the top four at the end of the group phase progressing to the semi-finals.

The 10-team tournament has garnered a lot of criticism due to the lack of Associate teams in the tournament.

With all the humdrum about 2019 being a batters’, World Cup, bowlers might be a little discouraged. But all is not lost for bowlers especially for the pacers as the rules have been recalibrated, and bowlers have established a measure of control. This coupled with the English swing, granting bowlers a little extra edge in the World Cup but don’t be fooled it’s still very much a batsman’s World Cup.

Coming on to the team analysis, England are the red hot favourites. As the world’s best cricketing nations tinker with their game plans and selections ahead of the World Cup, England knows all it needs is more of the same to win the tournament for the first time. Victory against Pakistan in their recently concluded series made it eleven consecutive bilateral ODI series triumph for England, and eight series wins in a row at home where the World Cup starts on May 30.

India enter the 2019 tournament as joint favourites with England. India skipper Virat Kohli’s reputation is forged in the cauldron of epic run chases, India’s captain boasts the most successful conversion rate of fifties to hundreds of any batsman with at least 5,000 one-day international runs: he has turned 41 of his 90 half-centuries into three figures. His record in successful chases also borders on the ridiculous: in 84 matches, Kohli averages over 95 with 21 hundreds.

Australia have also peaked at the right time, and in hindsight, probably wanted the tournament to start in April. But realistically, the month-long lay-off has enabled most of the players to refresh and raring to go by May.

When it comes to Pakistan, this 2019 team is coming with a horrible recent record – they've lost their last 10 completed one-dayers – but have 10 players from the 2017 Champions League squad and thus the firepower and experience to spring another surprise.

On the other hand, West Indies are packed full of amazing cricketers who can take the game away from the opponents single handedly. On his day, there are few players as destructive and entertaining in the world as all-rounder Andre Russell. Potent with the ball, bruising with the bat and agile in the field, Russell is the complete triple threat.

All the while Kiwi seam attack, spearheaded by Trent Boult, with the wiles of Tim Southee and raw pace of Lockie Ferguson in support, holds the key for New Zeland. In the batting department they are dependent on the trio of Kane Williamson, Ross Taylor and Martin Guptill, and all have been in excellent touch. Ross Taylor, 35, is in the form of his life, averaging 81 since the end of the 2017 Champions Trophy.

Sri Lankan cricket has hit an all-time low. All hope is not lost for Sri Lanka though. They are buoyed by the fact that their best match-winner Angelo Mathews is making a comeback from a hamstring injury that kept him out of the tours of South Africa and Australia.

Along with him, the Sri Lankans will be looking up to young Kusal Mendis for momentum. Sri Lankan fans have seen Mendis’ match-winning abilities particularly during the recent tour of South Africa where he put Dale Steyn and Kagiso Rabada to the sword.

Then there is Afghanistan. How could you be looking forward to anything else?

With the way Afghanistan seem to find incredible cricketers we've never dreamed of before, their batsman might start hitting sixes with the back of their bat by the time the World Cup starts.