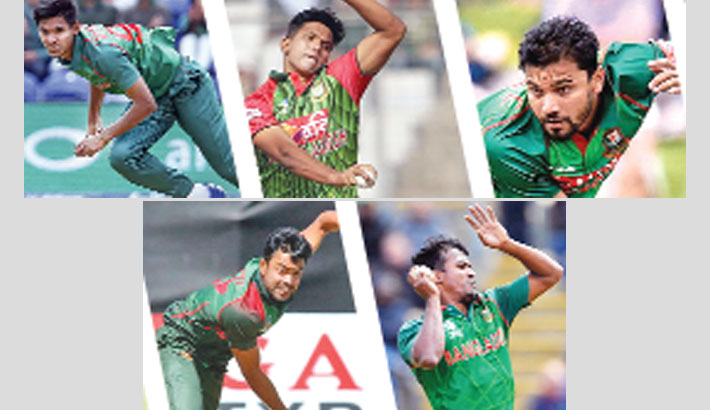 Is there any ancient spell put on Tigers which state that Bangladesh will never boast a feisty pace-attack? Just like the supernatural overtone of the sarcasm, Bangladesh squad’s never fulfilled desire for a genuine pace attack also appears to be unfathomable.

Despite the complex nature of the issue, let’s try to ‘dissect’ Tigers pacing woes ahead of ICC World Cup 2019 and cut out an escape route from the persistent problem.

The docile pace of our ace seamers has a long been an issue for Bangladesh. Starting from Khaled Mahmud Sujon’s extra gentle medium pace days, Bangladesh have come a long way but still a ‘genuine’ pacer is missing in Tigers’ bowling line-up. But all is not lost as the current pace attack is more than capable of troubling opponent batters on their own but only if they bowl according to their strength.

Tigers pace arsenal is comprised of skipper Mashrafe Mortaza, Mustafizur Rahman, Rubel Hossain and Abu Jayed Rahi. All four bowlers are very different and thus variation will have to be used to Tigers advantage to snatch success from the jaws of defeat.

Starting off with Mashrafe, the skipper needs no introduction and no praise. The injury-bound Tiger leader knows his strength and more importantly his weaknesses far too well. He will be bowling on good line and length all the while trying to extract some purchase off the pitch. Scalpels have restricted the once pacy seamer to speeds of around 120 kmph but there is no need to worry as English pitches have plenty on offer for medium pacers if he is willing focus on swing. Finally, he might want to bowl out his full quota of ten overs on a trot in his opening spell as Mashrafe’s death-bowling is not too famous.

But someone who made his name by choking batsman’s flow of runs is Tiger cutter-master Mustafizur Rahman. The out of form seamer’s well sealed off-cutters were once the nightmare for opposition batsman as his fast wrist movement completely deceived the batsman on the receiving end. Though far less lethal from his primetime form, Mustafizur is still a pretty decent left-arm pacer. He will have to bowl on areas which put the batsman on two minds about whether to commit to the shot or not. If he can successfully do that the rest will be taken care of by his natural swing.

The list of Bangladesh’s pacy pacers is not too crowded; Rubel Hossain surely comes at the very top of that list. Silently, Rubel bagged his third World Cup squad spot and why not. He is the only Tiger bowler who has ventured to north of 90mph range. Rubel can expected to do the heavy lifting in 2019. He will be tasked with shaking up batters by bowling fast bouncers so that the bowler at the other end can trap the distraught batsman. He might have to bowl in the death overs.

But all eyes would be on Abu Jayed Rahi who just made his ODI debut during the Tri-nation series. He cemented his spot in the final squad proving his worth with a fifer on his second ODI. His action is very conducive to swinging the ball. He also gets a bit of seam movement upfront. If he can prick the batsman on the off-stump corridor consistently, he will surely succeed in claiming the wicket.

A week back Bangladesh skipper Shakib Al Hasan told that cricket is not played on paper. At the end of the day, this remains the bitter truth. Match situation forces even the best of the best to crumble. Maybe this time Tiger pacers will prance the fields of England, maybe, just maybe will roar through the opponent lines.