‘The Nun’ : A Spine-Tingling Tale 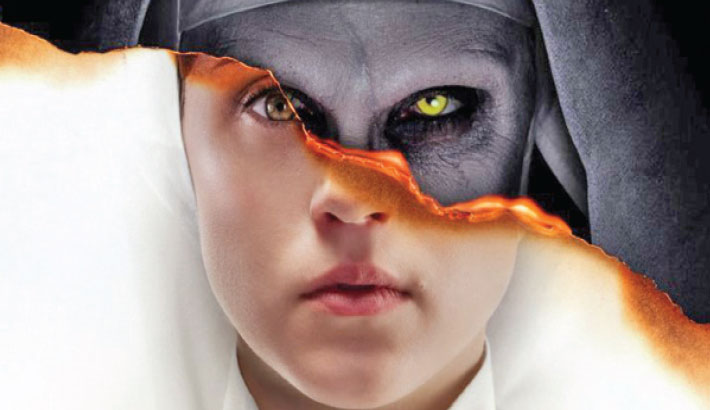 A demonic spirit stalks the cloisters of a secluded abbey in Corin Hardy's horror film starring Demian Bichir and Taissa Farmiga. The Conjuring films and their spinoffs are about the closest thing we have to a Hammerverse, so it’s fitting that the latest installment of Warner Bros’ lucrative horror franchise skitters across to Transylvania for a Dracula retelling in all but name.

Directed by Corin Hardy, ‘The Nun’ is set largely in a Romanian castle that’s avoided by the local villagers like the plague. It’s best reached by horse-drawn buggy, even though the film takes place in 1952. The movie’s rural setting allows it to play like a 19th century Gothic. That connective tissue is most obvious in the presence of the title character, last seen terrorizing Enfield in 2016's ‘The Conjuring 2’, who gets an origin story here in a fright-night special that could well ride the credentials.

Written by Gary Dauberman from a story he cooked up with producer Wan, ‘The Nun’ isn’t quite as frightening as that publicity triumph would suggest. And in jettisoning the focus on family of the previous films, it gives us characters whose interactions with each other feel less than detailed, and who are more archetypal than real. But it’s good clean fun nevertheless, and the set pieces expertly supply the tension-and-release satisfactions of the genre, starting with a particularly horrific prologue that ends with a young nun (Charlotte Hope) throwing herself from a window.

The Vatican sends a team to investigate the apparent suicide, led by Father Burke (Demian Bichir), a demon hunter haunted by an earlier, unsuccessful exorcism. Joining him is Sister Irene, a young novitiate played by Taissa Farmiga, the younger sister and spitting image of Vera, in a piece of metafictional casting that seems to hint at a connection between her character and the elder Farmiga’s Lorraine Warren that somehow never materializes. Nominally, the mission’s aim is to determine if the ground remains consecrated, but the bishops in Rome know more than they’re letting on.

Introduced riffing on the Bible’s omissions in front of a classroom of schoolgirls, Farmiga makes for an appealing, hiply modern heroine, while the disconnect between Father Burke’s accent and his surname fails to prevent Bichir from committing to a type we’ve seen before. They’re joined by Frenchie (Jonas Bloquet). Frenchie discovered the dead nun while delivering food to the abbey — computer-generated for the wides and otherwise shot discreetly — but that hasn’t dampened his aggressive flirtatiousness, and it’s only stoked when he learns that Irene hasn’t yet undertaken her vows.

Once the three cross the castle’s threshold, cinematographer Maxime Alexandre earns his keep with one jump-inducing whip pan after another, underlined by the cavernous, vocals-heavy score from Abel Korzeniowski — an old hand at this sort of thing after three seasons of Showtime’s Penny Dreadful. The tenebrous visuals are also aided by Jennifer Spence’s interiors, which consist of evocative variations on a dank, dark, cobwebbed theme.

The film’s cat-and-mouse second half contrives to split the characters up, with Frenchie back at the pub getting an earful from the superstitious townsfolk and Father Burke stuck in an antechamber, taunted by a forbidding abbess who transforms into the ghost of the boy he couldn’t save. Sister Irene, for her part, gets a history lesson from the sisters whose prayers are the only thing keeping evil inside the four walls the Church has safeguarded for centuries — but whose prayers may not have been enough.

Valak (a returning Bonnie Aarons) is the new ace. There’s something deliciously creepy about an icon of service made sinister; about seeing the cowl curdled. This makes it ironic that, like its predecessors, this is the rare Hollywood blockbuster in which members of the clergy are presented unambiguously as heroes. Sister Irene, Father Burke and Frenchie eventually reunite for an underground confrontation that plays out like a sequence from a Mummy movie, complete with flaming torches and even the odd quip, courtesy of the roguish Bloquet. But it’s Farmiga who emerges as the film’s plucky beating heart through a breakout performance.