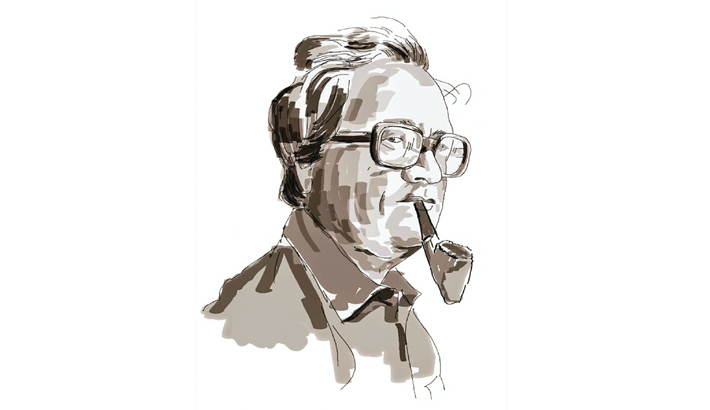 He is recognised as one of the most critically acclaimed Bangalee novelists. To read his novels is to go through an experience that thoroughly changes our world view and questions carefully about the constructed rationales and dogmas. In the tenets of 20th century Bangla fiction, no one’s writing is more distressing yet fascinating than him. His insight into the subtle shades of human characters, application of physical and psychological detail, ardent sense of wit and humour, sardonic treatment of hypocrisy, in-depth knowledge about history and politics, use of colloquial language and aesthetic articulation of all these in his novels and short stories have taken him to a classic height in the realm of Bangla literature. He is none other than Akhteruzzaman Elias. A less productive, but qualitative author of Bangla Literature, Elias wrote twenty-two essays compiled in Shongshkritir Bhanga Shetu (1998), twenty-eight short stories for his five compilations- Onno Ghore Onno Shor (1976), Khoari (1982), Dudhbhate Uthpat (1985), Dojokher Om (1989) and Jal Shopno, Shopner Jal (1997) and two novels- Chilekotthar Shepai (1986) and Khoabnama (1996). As he closely observed all the classes of our society and scrutinised the psyche of various strata of people, he reflected them in his creations. Elias’s novels are full of powerful portrayal of numerous characters. He was born on February 12, 1943. Ahead of the 74th birth anniversary of this great writer, morning tea pays tribute to Akhtaruzzaman Elias by discussing his novels’ major characters.

Elias’s first novel Chilekotthar Shepai was started to publish serially in Dainik Shangbad’s literary page in 1975 and later in Shaptahik Robibar in 1981, before University Press Limited published it in October, 1986. With two separate settings, Chilekotthar Shepai depicts the restless situation of Dhaka and a North Bengal village during the mass revolution in 1969. Osman Goni, a young man hailing from West Bengal who has been brought up in Dhaka and works in EPIDC, is the central character of the novel. Belonging to a lower-middle class family, he lives in a rented roof-top room at Laxmibazar in Old Dhaka. Being a government employee, he strongly supports the Bangalee nationalistic movement. Osman teaches Ranu (another tenant of the house) mathematics and he longs for her. After a brutal killing by Pakistan Army, Osman behaves abnormally, as he loses his mental balance. House owner Rahmatullah is a supporter of military dictator Ayub Khan. He wants to control the politics of local area. His nephew Alauddin Mia is an Awami League leader. They both run several rickshaw garages and represent the bourgeois class. Khijir Ali alias Haddi Khijir, another important character of Chilekotthar Shepai, lives in Rahmatullah’s slum with his wife Jummoner Ma and works in Alauddin Mia’s garage. Khijir is a spontaneous activist of anti-Ayub movement, who ultimately sacrifices his life for the sake of mass people.

Anwar and Altaf are the friends of Osman. Anwar believes in leftist political ideology and on the other hand, Altaf supports Awami League politics. These two vital characters symbolise the major political fractions of that time. Revolutionary Anwar goes to visit his village home in Bogra, but finds the similar story of subjugation even in the rural area, where his relatives Khoybar Gazi and Afsar Gazi continuously oppress the hapless people.

Anwar wants to do something for the ordinary village farmers. He actively supports the dissatisfaction of the mass. With the assistance of Hossain Ali Fakir, Khoybar and Afsar’s followers steal the cows of needy farmers of the village at night and take them to the Dhara Borsha’s char located on the bank of river Jamuna. Khoybar has been suppressing the villagers economically like the zamindars of British era. Though he practices religious rituals but never implements the spiritual guidelines in real life. He only uses religion as a tool to save himself from the wrath of agitated farmers. His younger brother Afsar controls the local politics using his muscle power and illegal money. Jalaluddin, a retired schoolmaster and husband of Anwar’s aunt Rahima, tries to balance between the two rival classes of the village. Nadu’s son Chengtu revolts against the capitalistic set-up with the inspiration of local leftist revolutionary Ali Box and is killed by the influential persons. Anwar returns to Dhaka to look after his ill friend Osman. Through the characters of Chilekotthar Shepai, Elias judges the relation of a human being with his surroundings, state, government and politics.


Elias took time before penning his second novel. Maula Brothers came with his most praised novel Khoabnama in 1996. Famine, communal riot, Tevaga movement, independence from British subjugation, birth of two new countries; all these become the parts of Khoabnama.  Like Chilekotthar Shepai, this novel also sketches the situation of a village situated on the bank of Katlahar fen, and town area through the Kalitola’s house of Abdul Aziz. Elias introduced magic realism in Bangla literature through this novel. He presented the character of Tomijer Bap as a ghost or dead spirit, who lives on the top of a village tree and observes the activities of the villagers. Khoabnama deals with a transitional period when maximum Hindu zamindars start to shift their wealth selling their properties to the Muslim neo-elites in East Pakistan. Story of the novel begins with how the protector of Khoabnama Tomijer Bap gets the book from Cherag Ali Fakir and then loses it. It portrays Tomij as the central character. Being a member of a poor boatmen family, he works under the local landowner Shorafot Mondol. He protects the properties and interests of the landowner.

He cultivates crops. Tomij has to look after his stepmother Kulsum. Tomij marries local farmer Hurmatullah’s daughter Fuljan to settle his love affair. They have a daughter named Sokhina. Tomij works hard and dreams that one day he would be an able farmer. He believes that with the assistance of the landowner he will make his fortune someday. Ultimately, it doesn’t happen. At one point, police arrests Tomij for the murder of Afaz. He is eventually released, but becomes the victim of the enmities of the local dominants Abdul Kader and Kalam majhi again. As an accused in the murder case of Boikunttho (a hapless Hindu villager who incidentally is killed while sleeping at the shop of local businessman Jagadish Saha), he has to choose the life of an escapee to avoid police and to participate in the Tevaga movement with the agitated farmers leaving his beloved wife and daughter alone. The novel shows how the elite class and Muslim League leaders like Abdul Kader (son of Shorafot Mondol) and Ismail initially called the mass farmers to support the Pakistan Movement. Though they assured that the post-independence government will meet their demand of Tevaga (a system of distributing two third of the total crops among the landless farmers instead of allowing the landowners to take the two third of the cultivated crops), but ultimately cheat the under-privileged farmers. In the liberated Pakistan, government does nothing for them. Hapless farmers remain poor. And the landowners grab their crops with the help of police force. Like the loss of Khoabnama, the novel ultimately exposes how the poor villagers lose their dreams.

According to Elias, past is not a dead thing. Past helps us to understand the position and development of present and at the same time it helps us to communicate with the future. That is the reason why time is the protagonist of Elias’s novels. Critical political history of this region and never-ending struggles of the mass people come simultaneously in his writings. He focuses on the period when Pakistan got independence in his first novel and the second one highlights the Bangalee nationalistic movement that led to the Liberation War. All the characters of Akhteruzzaman Elias’s novels are somehow related to politics, as he believed that every individual is a political animal. He examined our feudal society and discovered that whenever any person stands against the established system, he becomes the victim of conspiracy. Elias showed that the essence of colonial legacy still dominates our system and without changing this system, fate of his novels’ characters will remain unchanged.