“I find my people still groaning under hunger, landlessness, indebtedness, and bonded labour. An anger, luminous, burning, and passionate, directed against a system that has failed to liberate my people from these horrible constraints is the only source of inspiration in all my writing. All the parties to the Left as well as those to the Right have failed to keep their commitment to the common people. I do not hope to see in my lifetime any reason to change this conviction of mine. Hence I go on writing to the best of my abilities about the people, so that I can face myself without any sense of guilt or shame. For a writer faces judgment in his lifetime and remains answerable.”

With the departure of Mahasweta Devi, on July 28, an era ended.  She was a living bridge between artistic creativity and social activism. Combining literature, journalism and grassroots action, she indefatigably championed the cause of the marginalized. She was intolerant against hypocrisy, complacency and indifference. Deeply moved by how the ethnic and the poor are pauperized and abused, Devi dedicated herself to expose how the helpless are exploited in the society. A determined Devi shocked her middle-class readers by portraying the actual pictures of the society. She never compromised. Her life was a lesson in the idea that, indeed, one person can make a difference.

Mahasweta Devi was born in a privileged Bangalee family on January 14, 1926 in Dacca. Though she shortly attended Eden Montessori School in Dacca, it was in West Bengal where she grew up in a large and intellectually rich family. Her father, Manish Chandra Ghatak (1902–1979), was a renowned poet and prose writer. In the 1920s, he was part of a group of young writers who pioneered a new branch in literature by writing new types of realist stories that dealt with the seemingly underside of the society. Her mother, Dharitri Devi (1908–1984) loved Pearl S Buck’s novels and translated some of them. Dharitri was also a social worker who devoted a large part of her time in promoting literacy among the underprivileged children. Mahasweta’s uncles won prominence as artists, journalists and filmmakers. Among her uncles, the pioneering cinematographer Sudhish Ghatak, film director Ritwick Ghatak, journalist Sachin Chowdhury and sculptor Sankho Chowdhury are most famous.

Mahasweta Devi was brought up in a family where everyone said, “Read, read and read”. She was fond of Western authors. Her favourites included Charles Dickens, Honor de Balzac and Anton Chekhov. She liked Bangla classics like Chandimangal by Mukundaram Chakravarty as well. Chandimangal’s narrative poems stirred her interest in fiction and history. Her family moved around a lot because of her father’s job as a government income tax officer. She finished her elementary education at Medinipur Missionary Girls’ School in 1935, attended middle school in Santiniketan (1936–1938) and finished high school at Beltala Girls’ School in Calcutta (1939–1942). Santiniketan left a deep influence on young Devi. There she met students from all over the world and came to think herself not just as a Bangalee but part of the greater world.

Mahasweta Devi attended Asutosh College (1943–1944) and then returned to Santiniketan to earn her bachelor’s degree in 1946 but she soon felt that Santiniketan was no longer what it used to be, something was missing. During the years of the Great Bengal Famine (1942–1944), as a young college student, Devi joined her classmates in relief work. The sight of so much suffering and death deeply affected her. She felt that something was changing deep inside her. 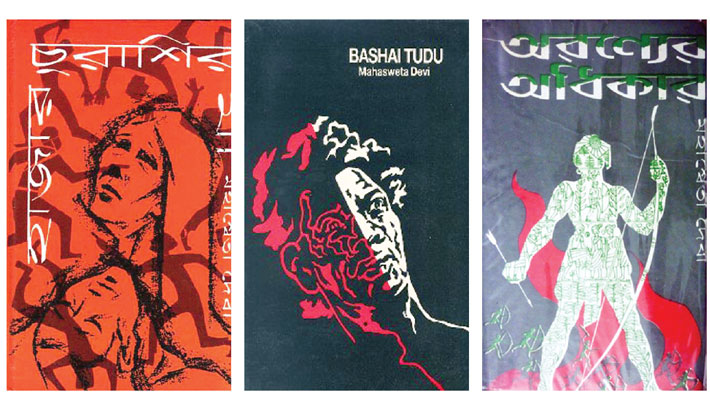 In 1946 communal rioting among Hindus and Muslims took place in Calcutta and elsewhere in the Punjab and Bengal, unleashed by the intensifying conflict between the Hindu-dominated Indian National Congress and the Muslim League. On August 1947, two new countries were born, India and Pakistan.

After completing her college graduation in 1946, against the opinion of her family, Mahasweta Devi married Bijon Bhattacharya, a playwright who acted in Ritwick Ghatak’s films. Bijon was a member of the Communist Party of India (CPI). She and her husband lived in a one-room apartment on the outskirts of Calcutta. In 1948, they had a child (Nabarun, who would later become a poet, actor and novelist). It was a difficult time for the family. Communists and their sympathizers were harassed and Bijon could not find a job. To support the family, Devi worked as a teacher at Poddopukur Girls’ School (1948–1949) and then gained employment as an upper division clerk in the regional office of the Deputy Accountant General of Post and Telegraph (1949–1950). She was accused of following communism and dismissed from her government job.

Then to supplement her income, she wrote for Sachitra Bharat, a Bangla weekly, under the pen name Sumitra Devi. Her first major work Jhashir Rani, a fictionalized biography of the woman ruler of a north Indian state who fought against the British in 1857 in the first war of independence, was published in 1956. To write the novel, in 1954, she travelled to the Bundelkhand region to collect archived data, oral history and scraps of legends and folk ballads. There she gained firsthand knowledge of the places where the Rani of Jhashi fought against the British. In 1962, Devi divorced Bijon, leaving her fourteen-year-old son with his father. She lived on her own in the remote southern outskirts of Calcutta and went through a terrible spell of depression during which she attempted suicide by sleeping pill overdose. In 1963, she did her master’s degree in English Literature from Calcutta University. From 1964 to 1984, she worked as an English lecturer at Bijoygarh Jyotish Roy College and taught the poor students at a refugee area.

It was a time when Mahasweta Devi began to focus on what she wanted to become in her life. A turning point came in 1965 when she visited Palamau, a remote and impoverished district in Bihar. Moving from place to place on foot, she witnessed the indigenous society of absentee landlordism, a despoiled environment, debt bondage and state negligence. She subsequently observed the same dismal conditions in other tribal districts. Exploitation and negligence had forced people to a subhuman existence there.

This exposure was reflected in Devi’s work. This can be seen in the novels Kobi Bandyogoti Gayener Jibon 0 Mrittu (1966), which depicts the struggle of a low-caste boy in fifteenth-century Bengal, and Andharmanik (1966), which deals with the upheaval in Bengal’s society during the mid-eighteenth century. A deep social awareness and literary maturity converged in her watershed novel of 1974, Hajar Churashir Ma. The plot revolves around a mother who one morning is summoned to identify her Naxalite son, lying dead in the police morgue. 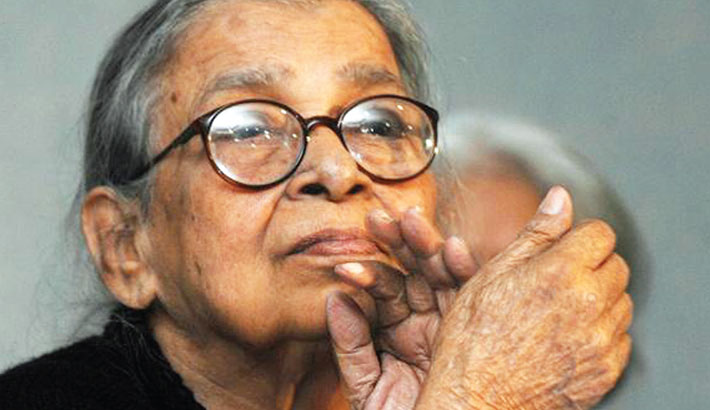 In the following years Mahasweta Devi further depicted the Naxalite Movement in her works such as Agnigarbha (1978), four long stories about the Naxalite tribal unrest, and the novel Bish-Ekush (1986). Devi used fiction not only to resurrect forgotten episodes of tribal and feudal past but also to highlight acts of local resistance against aggression and oppression. Among her historical fictions are Aranyer Adhikar (1977), a meticulously researched novel on the life and struggles of Birsa Munda and the famous Munda Rebellion against the British in the late nineteenth century; Chotti Munda 0 Tar Teer (1979), which narrates the history of one of the tribes of eastern India in the first seven decades of the twentieth century; Subhaga Basanta (1980), a collection of two novels depicting slavery in the eleventh century and Sati Daha system in the eighteenth century and Sidhu Kanhur Daakey (1981), a novel on two heroes of the Santal tribal rebellion in 1855–1856.

Mahasweta Devi rendered scenes of the past in their immediate physicality, as if they were nothing less than contemporary and created characters evolving through their interactions with a historical process. She critically reflected her own social class position in works exploring the dilemma of the bourgeois intellectual’s social loyalties. These works include Gharey Phera (1983), which treats the degeneration of a once politically committed writer, and Srinkholito (1985), a novel about a writer torn between an easy life and one of social commitment.
Devi had written on the profound subordination of women in Bioscoper Baksho (1964), about the condition of women in tradition-bound middle-class society. Swaha (1977) highlights on Sati Daha, Daulati (1984) includes three interlinked stories on the Palamau bonded labour movement, Iter Parey It (1987) is a compilation of stories about tribal women exploited in brickfields and Prothom Poth (1988) is a novel based on a true story of an illiterate tribal woman who strives to establish a school in her village.

A distinct class-consciousness is vivid in Devi’s writings. While she professed little interest in ideological abstractions and theorizing, Devi was clearly influenced by the Marxist ideas, which she picked up during her formative years. Though she never joined politics, but her fictions presented the situations of the oppressed and the excluded and she kept a faith in their capacity for self-emancipation.

She explored the history of the Santals, Hos, Oraons, Kurunis, Mundas, and other tribal communities in her fictions. The year after her father died in 1979, Devi started editing the Bangla quarterly Bortika, an obscure literary periodical, which her father had edited before her. She turned it into a forum where people of different tribes, peasants, day labourers, factory workers and rickshaw pullers wrote about their life and problems.
In 1982, Mahasweta took a two-year leave of absence from her college where she had been teaching English literature since 1964 and joined Jugantar, a Bangla newspaper, as a roving reporter. This gave her greater opportunity to travel and learn about the conditions of the countryside. She resigned from her teaching job in 1984 and became a full-time writer. Devi wrote at Dainik Basumati for about a year and then joined Bartaman, for which she wrote a weekly column until 1991. She wrote articles and investigative reports for English-language periodicals such as the Economic and Political Weekly, Business Standard, Sunday, Frontier and New Republic. Her works in both English and Bangla showcased her commitment and passion. Journalism was an integral part of her life. She embraced journalism as means of social advocacy instead of a profession. She located herself, marked out her vantage point at the peripheries, in the rural districts, instead of working at the comfort of metropolis. She didn’t just collect information from “informants”, she spoke to the people she wrote about and worked side by side with them for the remedy of their problems. Mahasweta Devi successfully attracted the eyes of the critics and received numerous prestigious awards. She also led hundreds of organisations, which were established to protect the interests of the underprivileged and tribal communities.

One of the most prolific writers in Bangla, Mahasweta Devi wrote and published over one hundred fictions in addition to a large number of journalistic and other writings. Her innovative use of language expanded the conventional borders of Bangalee literary expression. Overcoming the boundaries of language, she broke down the barriers of class as well. The uncompromising practicality of her fictions led critics to see her work as a critique of the Bangalee Renaissance. Devi saperated herself from the high diction and musicality of Renaissance writing by immersing herself in the non-Sanskritic idiom of the tribal world and by assuming the terse, direct style of modern journalism. Mahasweta Devi died, but her creations will continue to inspire all to work for the humanity in the coming years.