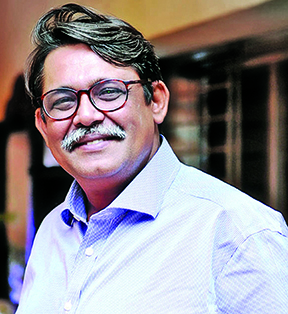 Nadeem Qadir is one of the leading journalists of Bangladesh and has been working in different media houses since 1978. He is the only Bangladeshi recipient of the Dag Hammarskjold Fellowship, one of the most prestigious in international journalism.

The prestigious “Ice Today” magazine named him as one of the 20 Bangladeshis across the world who needed to be followed for their respective contributions/achievements along with Bibi Russell and Junaid Kamal Ahmed of the World Bank. In 2016, Star Weekend magazine published Qadir's profile as an achiever . He has been interviewed by leading newspapers of Bangladesh, India and Britain

He served in the Bangladesh High Commission, London as Minister (Press) and was named as the most successful man in that post so far. He did his post-graduate in International Relations and worked for the weekly Holiday, weekly Dhaka Courier, fortnightly Bangladesh Today, the national news agency Bangladesh Sangbad Sangsthe and for almost two decades served as the Special Correspondent with the Paris-based international news agency Agence France-Presse. At the same time he worked for the world’s largest circulated monthly magazine Reader’s Digest and Outlook, India. He then served the Press Trust of India (PTI), ETV, NTV, RTV and ATN News. He worked with the TV South Asia first as its Consultant in Kolkata, India, and then as its representative in Dhaka. On return fromLondon in2017, he briefly worked with the Asian Age newspaper and is currently the Consulting Editor of the Daily Sun.

Nadeem was the youngest columnist for the Daily Star newspaper and currently writes for a number of publications in Dhaka. Conceived and anchoredBangladesh’s first English language talk show named “Frankly Speaking” in NTV, which was a hit.

-        He has six publications to his credit with My Beautiful Bangladesh (three editions - 3rd edition February, 2015) and Muktijuddho Ajana Addhya (Untold Chapter of Liberation War) February, 2015 were well received by foreign and local book lovers.

Save our expatriate workers

Reopening of schools will be suicidal

Salute to brave heroes fighting & dying to save us

PM’s directive, military, medics, but who else?

Tale of a China returnee

Was Abrar killing a conspiracy?