The World Cup-winning players of Bangladesh Under-19 National Cricket Team were given a heroic reception on their arrival at Hazrat Shahjalal International Airport in the capital on Wednesday.… 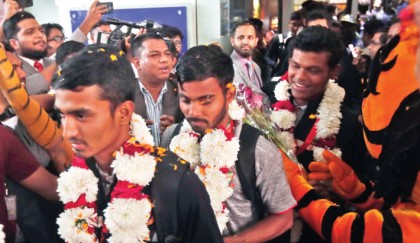 Sports, culture can keep youths away from drug, militancy: PM

Prime Minister Sheikh Hasina on Wednesday put emphasis on enhancing the practice of culture and sports to keep the young generation away from drug, terrorism and militancy, saying that it is indispensible…

After the ICC Under-19 World Cup final was marred by an ugly scuffle between the cricketers from Bangladesh and India, former India captains Kapil Dev and Mohammad Azharuddin have called for ‘strict…

Human traffickers have reportedly become active again in trafficking fortune-seekers, especially Rohingyas, abroad in different ways. The miscreants had gone into hiding in the face of police…

4 arrested for attack on News24 journos

None infected with coronavirus yet: IEDCR

American Senator Mr. Edward Kennedy came to Bangladesh on 14 February 1972 on a two-day visit. Senator Kennedy had, by that time, become a very popular personality to the people of Bangladesh for raising…

Bashundhara Group (BG), a leading industrial and business conglomerate in the country, is set to begin its venture in the bitumen sector as the first private company in the country’s history…

Dubai’s jobs vanish at fastest pace in a decade
Education
Parents Involvement in Child Education: Why and How?

Parents’ involvement is a combination of commitment and active participation on the part of the parents to the school and the student. Parent involvement happens when teachers involve parents…

School sports days can be fun for all
Asia
Doctors at China’s virus epicentre overworked, unprotected

BEIJING: Doctors on the frontline of China’s new coronavirus epidemic are facing a daunting task: treat an ever-growing number of infected patients and risk getting infected themselves due to…

ISTANBUL: Turkey’s president accused Russia of committing “massacres” in its support of the Syrian regime on Wednesday, escalating a war of words as Turkish reinforcements arrived…

The National Drama Festival 2020 began at Bangladesh Shilpakala Academy (BSA) on Wednesday. Bangladesh Group Theatre Federation has organised the drama extravaganza in collaboration with the…

Sir, I love you, a drama

Bangladesh Under-19 National Cricket Team players receive garlands of flowers on their arrival at Hazrat Shahjalal International Airport in the capital from South Africa on Wednesday.

A title of dreams and countless journeys

KHULNA: The coronavirus outbreak in China has started taking its toll on crab farmers and exporters in Khulna region as its export to the world’s second economic giant remained suspended since…

SYDNEY: For tens of thousands of years, Australia’s Aboriginal people have used fire to manage the landscape, and after a summer of raging bushfires the practice is increasingly being seen as…