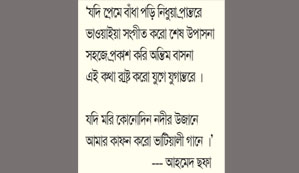 University of Dhaka gave birth to a number of intellectuals. These bright scholars played a significant role in shaping the hearts and minds of common students. Before the Liberation War of 1971, they inspired the students to dream of an independent state and after the independence they rightly improvised their role to motivate students to build a prosperous country. Abdur Razzaq, a professor of Political Science was a key figure because of his intellectual practice during the pre-liberation era. After him one of his students continued that legacy most successfully and created his own mark in the post Liberation War Bangladesh. He was Ahmed Sofa. He may be considered as the most influential intellectual of independent Bangladesh.
Sofa was born on 30 June, 1943 in a peasant family in Chittagong’s Chandanaish upazila’s Hashimpur union’s Gachbaria village. He was the second child among the two sons and four daughters of his parents Hedayet Ali and Asia Khatun. After living a meaningful life of 58 years, Ahmed Sofa died on 28 July, 2001 in a Dhaka hospital. Ahead of his 14th death anniversary, morning tea remembers him with proper admiration that he deserves.
During the early life, Ahmad Sofa embarked upon the struggle for existence to bear the cost of education. He passed matriculation from his village’s Nittanondo Gourochondro High School in 1960. Sofa passed intermediate from Chittagong’s Najirhat College in 1962. In the same year he took admission in the Bangla Department of the University of Dhaka. But, he couldn’t continue. However, Sofa completed graduation from the Brahmanbaria College in 1967. Before attending his Masters final examination, Ahmed Sofa was nominated for a three years’ Bangla Academy fellowship to complete a Ph.D degree. The topic of his Ph.D thesis was ‘Rise and development of Bangalee middle class from 1800 to 1957 and its influence in Literature, Culture and Politics’. As usual Ahmed Sofa didn’t complete his Ph.D. He passed his M.A. in Political Science in March, 1971. Later, Sofa completed a post-graduate diploma on German language from the Goethe-Institut in 1986.
When Ahmed Sofa went to work for his Ph.D. in 1970, he came closer to the National Professor Abdur Razzaq. He was hugely motivated by this veteran teacher and thinker. On 7 March, 1971, Ahmed Sofa published ‘Protirodh’, which is known as the first revolutionary newspaper in support of the independence of Bangladesh. In the same year he established ‘Lekhok Shongram Shibir’ and participated in the different programmes of the organization. He went to Kolkata in April, 1971 and regularly published a newspaper named ‘Dabanol’ to prop up the Liberation War of Bangladesh. 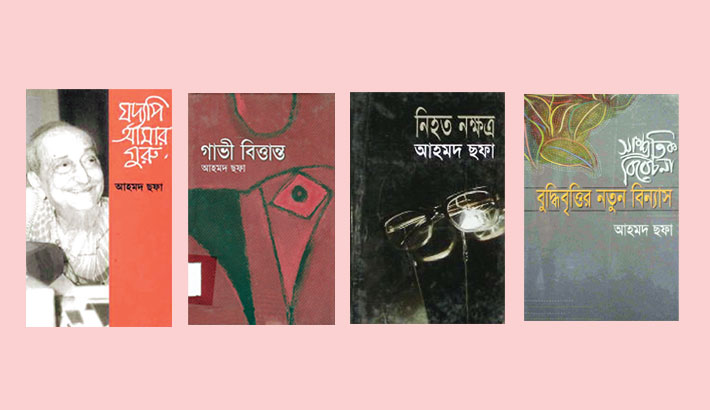 After coming back in the independent Bangladesh Sofa started to write again. A veritable powerhouse of infinite passion and creative energy Ahmed Sofa cultivated with ease almost all the fields of literary landscape of Bangladesh and produced valuable harvests, both in terms of quality and quantity, which in itself is a rare accomplishment. His epic poem ‘Ekti Probin Boter Kache Prarthona’ is a unique addition to the realm of Bangla poetry. His other poetic works ‘Jollad Shomoy’, ‘Dukher Diner Doha’, ‘Lenin Ghumobe Ebar’ are also vastly popular among the intimate readers of Bangla poetry. In fiction, he penned such immortal story as ‘Ongkaar’, which till today remains as the best literary expression of our great language movement. Beginning with his very first novel ‘Surjo Tumi Shathi’, a heart-warming tale of communal harmony, where he experimented boldly with the use of the local dialect of Chittagong, he continued breaking new grounds in each of his subsequent fictional works, such as ‘Alaatachakra’, ‘Ekjon Ali Kenan-er Utthan’, ‘Gabhi Bittaanto’, ‘Moron Bilash’, ‘Pushpo Brikkho ebong Bihongo Puran’, ‘Ordhek Nari Ordhek Esshori’ to name a few, significant both in form and content. His compilation of short stories ‘Nihoto Nokkhotro’ proves his ability as a short story writer. Some other noteworthy publications of him include a fascinating translation of the famous German classic Faust by Goethe, ‘Bankimchandra: Shotoborsher Pherari’, a critical study of noted Bangalee writer Bankimchandra Chottopaddhay and ‘Joddopi Amar Guru’, an outstanding memoir of his mentor Professor Abdur Razzaq. 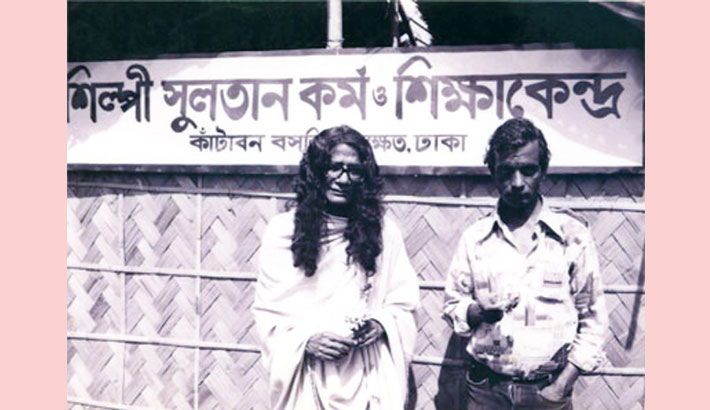 Apart from his creative output Ahmed Sofa contributed profusely in the lackluster domain of critical writings too. ‘Bangalee Musalmaaner Mon’ and ‘Buddhibrittir Notun Binnash' are two such milestone social observations and original analysis which earned him a permanent place in Bangalee intellectual practice. Closely associated with various movements in the locality during his early youth, Ahmed Sofa later was actively involved with left politics, which culminated into his glorious participation in our war of independence in 1971 when he earned the credential of writing the very first book on the emerging nation, titled ‘Jagroto Bangladesh’. Thereafter he ceaselessly continued his socio-political writings along with the creative literature, with ever growing devotion and commitment towards his beloved motherland and the fellow countrymen. His courageous pen never failed to register his voice of passion and protest at any and all significant national events. Those numerous timely and yet timeless articles were later collected in several books such as ‘Rajnitir Lekha’, ‘Ahmed Sofar Rajnoitik o Orajnoitik Probondho’, ‘Sheikh Mujib o Onnanno Probondho’, ‘Taslima o Onnanno Sporshokator Bishoy’, ‘Bangalee Jati o Bangladesh Rashtro’, ‘Shongkoter Nana Chehara’, ‘Upolokkher Lekha’, ‘Bangladesher Rajnoitik Jotilota’, ‘Sheishob Lekha’ etc. Over the years he virtually became the ever uncompromising conscience of the nation, always upholding the truth and justice. He never tried to please the power and the establishment.
As a person Ahmed Sofa was next to none. The word simplicity goes perfectly with him. His giant heart was always overflowing with unadulterated love for the wretched of the earth, which prompted him in countless occasions to go out of the way to help others. He was like a guardian angel, a patron saint to the writers of the younger generation, who personally helped many of them in getting their works published. It is worth mentioning that Ahmed Sofa was instrumental in publishing the very first book, ‘Nondito Noroke’ by popular literary icon Humayun Ahmed. He was the sole driving force in establishing and popularizing a truly genius artist Sheikh Mohammad Sultan in post independence Bangladesh.
After the partition of Bengal, there were not a lot who seriously tried to touch the psycho of Bangalee Muslims. As Bangalee Hindus first learnt English and were appointed in different higher positions of the English colonial government, Bangalee Muslims were deprived. Later, when British authority started to play the ‘divide and rule’ game, then Bangalee Muslims somehow got an opportunity to explore themselves. They first blindly supported the Pakistan movement to establish a separate state for the Muslims. But, after the birth of Pakistan, watching the discriminating attitude of West Pakistani Muslims, Bangalee Muslims gradually understood their wrong position of Muslim nationalism as they found that religious identity never helped them to establish their rights. However, they didn’t take too much time to correct their mistake as they courageously dreamt for a separate secular state named Bangladesh. Ahmed Sofa was the first Bangalee intellectual who spotted these transformations of Bangalee Muslims. Besides, he was the person who reminded Bangalee Muslims about their liberal attitude and age old folk culture. Ahmed Sofa took his position against the so called ‘elite culture’ of city centered life, rather he indicated that the Bangalee culture is actually preserved by the people of our villages.
Ahmed Sofa was a person who could effortlessly transcend the barrier of race, religion, gender, age, education, social status, etc. Above all isms and ideology Sofa was a true humanist at heart who literally dedicated his entire life to serve his motherland and the mankind. If the younger generation reads Sofa’s creations more, if they learn from the life of Sofa, it will be the best way to respect this great selfless soul.