The father of the nation, Bangabandhu Sheikh Mujibur Rahman’s vision of education is inextricably linked to his overall political vision or ideals. Bangabandhu dreamt of an independent and exploitation-free homeland based on Bengali nationalism for his countrymen. Being inspired by his dream and with an undaunting spirit he  led a 23-years long political struggle through organising and uniting his people that culminated in the nine-month bloody war of independence with his  formal announcement for liberation of the soil on 26 March 1971 resulting in the emergence of independent Bangladesh. The core elements that form the political ideal of Bangabandhu are Bengali Nationalism, Democracy, Socialism and Secularism which also symbolize the spirit of our liberation war enshrined in Bangladesh constitution presented by Bangabandhu in 1972. Bangabandhu’s vision, thought or philosophy of education is rooted in and emanated from his political ideals. To get an insight of his vision of education we have to make meticulous study or examine numerous documents including Bangladesh Constitution, Kudrat e Khuda Education Commission Report, Election Manifesto of Bangladesh Awami League, his speech on numerous occasions and Bangabandhu’s recently published book Unfinished Memoirs and Prison Diary.

After Bangladesh came into being following a decisive victory against Pakistani invading forces, Bangabandhu on his return from incarceration in Pakistan jail to the newly born Bangladesh embarked on rebuilding the war ravaged country. Bangabandhu used to say he needs Sonar Manush (Golden Man meaning pure man) for building Sonar Bangla (Golden Bengal). Bangabandhu deeply realised he needed educated workforce as well as experts of various field for his rebuilding and reconstruction programs and hence right from the beginning gave foremost priority to education.

Now we will try to get a complete picture of the Bangabandhu’s vision of education scattered on various documents through having an analytical look at those relevant documents. 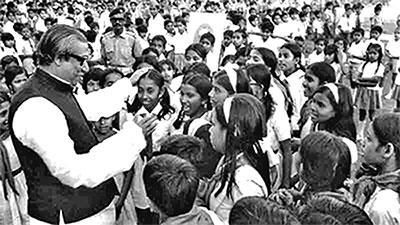 enshrined in the constitution that will not only contribute to development of human resource  but also mould the character of the nation with the most progressive and scientific frame of mind. Article 17 of the constitution provided for a mass oriented, uniform, progressive and scientific education system with a provision for  free, compulsory primary education accommodating the educational visions of Bangabandhu. Bangabandhu wanted to build a progressive and enlightened nation with advanced knowledge of the age and universal human values that will translate his dream of Sonar Bangla into reality. With that end in view to install a time befitting, mass oriented and scientific education system Bangabandhu formed an Education Commission with renowned Educationist and Scientist Dr Khudrat e Khuda as its Chairman. The commission was formed in 1972. The commission was tasked to formulate an education system suiting the needs of the new born state and in conformity with the state ideology and relevant constitutional provision.

The Commission submitted its final report on May 30, 1974. The reports contained all the ingredients for installing a progressive, modern, mass oriented, uniform and scientific education system as outlined by Bangabandhu in his meeting with the Commission immediately before commission started its work. But as ill luck it would have been for the nation before initiating the implementation process Bangabandhu was brutally killed along with his family members and other close relatives on 15 August 1975.

Bangabandhu was a visionary leader hence envisioned an education system that would unleash the potentials of the nation leading to development of human resource thereby ensuring speedy reconstruction and development of the country. Alongside eradication of illiteracy through expansion of primary and secondary education Bangabandhu put much emphasis on  technical education to meet the requirement of technical  manpower for reconstruction of war ravaged country. He also emphasized strongly on agricultural education, research and practical training of the student in the field for perfection of knowledge in order to attain food autarky through application of scientific method of cultivation.

Bangabandhu's vision of education was well reflected in one of his speeches before the elections in 1970. Terming the education as the best of investment in his speech Bangabandhu emphsised the following points pertaining to education:

(a)   Bangabandhu stressed on the eradication of illiteracy and compulsory free primary Education. He also called for introducing crash programmes for the children of 5 yrs of age.

(b)  He emphasised on the increase of salary of the teachers of all levels with special focus on primary school teachers.

(e)    Last but not the least he demanded 4% of GDP to be allocated for education.

It’s a policy statement of Bangabandhu on education which bears the testimony to his foresight and forward looking vision on education so far as the nation building is concerned. Bangabandhu took following extraordinary steps in line with his educational thought immediately after independence for expansion of education and eradication of illiteracy.

Alongside eradication of illiteracy through expansion of primary and secondary education Bangabandhu put much emphasis on technical education to meet the requirement of technical manpower for reconstruction of war ravaged countries.

As far as higher education is concerned Bangabandhu believed in free exercise of knowledge and research. Hence he took initiative to ensure a free atmosphere in the arena of higher education so that it triggers creative thought, generation of knowledge through research, insightful and analytical debate that should go on unhindered and without any outside intervention. In order to ensure free academic and democratic atmosphere Bangabandhu gave greater autonomy to four universities through promulgation of 1973 order. He emphasised on applied research in higher seat of learning for indigenous solution to local problem and development of local technology.

Bangabandhu also took initiative to mordainse Madrasha education through establishing Madrasha Board. This was a farsighted step of the Bangabandhu to ensure the required level of competence and skill for them so that they can compete at all levels.

Bangabandhu’s thought for allocation of 4% of GDP in education reflects his farsighted thought and his highest emphasis on education. Our allocation in education sector in terms of GDP is still hovering around 2.4 to 2.5% which is much less than the desire of the Bangabandhu and also less than internationally set standard. Moreover Bangabandhu through an ordinance created University Grant Commission with renowned Academician to facilitate higher education for allocation and monitoring of grant to the University. This body was also tasked to advise the government for development of higher education.

Bangabandhu dreamt of a Sonar Bangla for his countrymen and well realised that only through education he can transform his people into human resources who will contribute to nation building as well as development activities thereby elevating the country to the status of Sonar Bangla making his dream a reality. But before materializing his dream of Sonar Bangla through installing a scientific, people oriented and time befitting education system on the basis of the Kudrat E Khuda Commission report he was brutally killed along with his family members and others. After he being mitered usurper of the state power shelved the report and it never saw the light of the day.

Bangabandhu is our national hero, architect of independent Bangladesh, he might be   physically killed but his ideal of a Sonar Bangla based on the four state principles representing our liberation war spirit is immortal and remain ever alive. His able daughter Sheikh Hasina, the Honorable Prime Minister with her brave heart and acumen came forward to play the role imposed on her by history symbolizing the continuation of the ideals of Bangabandhu. She presented the national Education policy 2010 following the footsteps of her father that was based on the Kudrat e Khuda Commission report. Moreover while formulating the report the commission formed with renowned Educationist Professor Kabir Chowdhury and Dr Khalequazzaman as Chairman and Co chairman respectively took into consideration Vision 2021 including Digital Bangladesh programme, vision 2041, MDG goal, Perspective Plan etc to equip the nation with skills and knowledge of the day so that the nation are well prepared for its forward march towards building Sonar Bangla.

Honorable Prime Minister Sheikh Hasina is now working hard to implement the Education Policy 2010. So many initiatives have already been taken in this regard and considerable progress in education has been achieved. The achievement in education include among others,  almost hundred percent  enrollment in primary education, lowering  dropout rate drastically through different initiative like stipend, feeding programme etc, expansion of female education as a result of which female student outnumbered the male student at secondary and higher secondary level. Government focus on higher education for building research infrastructure in universities through development project and extending research grant to researchers from various government sources created momentum in research activities. Infrastructure development in educational institution at all level took place in a large scale equipped with many learning facilities. To ensure access to higher education many new colleges and universities including private universities have been established. ICT Education and development of ICT infrastructure got highest priority and digitization process in Bangladesh Made unique advancement. ICT facilities have been expanded to the farthest corner of the country  hence despite so many challenges in this pandemic government is running educational activities online very successfully.

This article is a little effort to understand the vision of education of our father of nation Bangabandhu Sheikh Mujibur Rahman which is deeply linked to his political ideals and how his able daughter is now working hard to shape our education system on his vision for materialising the dream of Bangabandhu’s Sonar Bangla or Golden Bengal.

Population will turn into human resources through education: Naryan 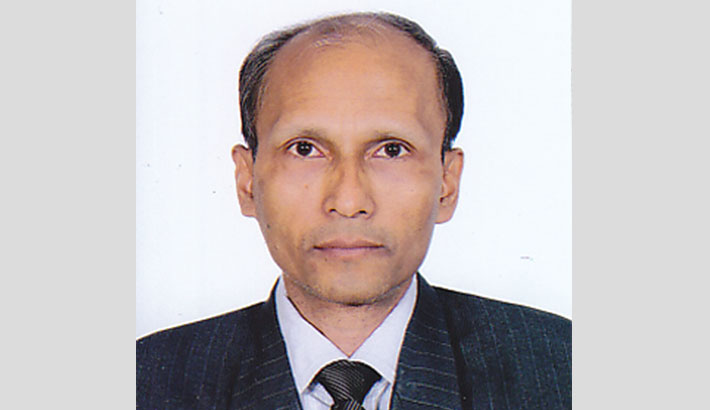