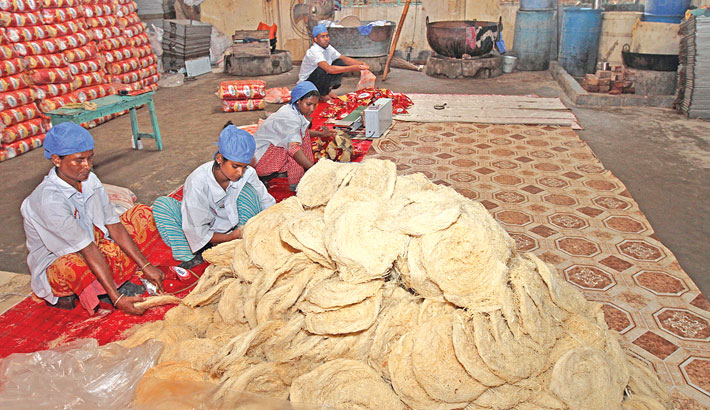 Adulterated vermicelli is being manufactured at different factories in the capital ahead of Eid-ul-Fitr. The consumption of such vermicelli poses serious health risk. The photo has been taken from a factory at Kamrangirchar recently. – SUN PHOTO

A section of dishonest businessmen is producing substandard vermicelli and marketing those widely across the country ahead of Eid-ul-Fitr, posing a serious health risk.

Adulterated vermicelli is being produced in manually-operated machines in unhygienic conditions and fraudulent traders are marketing those products using the names of renowned vermicelli brands, sources said.

Adulterated vermicelli is produced in a very unhygienic environment in makeshift factories near small cities and adjacent areas and widely marketed ahead of every Eid.

vermicelli without following the standards set by BSTI.

Azmeri Food products was producing fake and substandard vermicelli and packaging those in the name of Romania, Bonoful, Rizik and Kutumbari branded vermicelli products.

Executive magistrate Sahadat Hossain has directed the authorities concerned to file a regular case against the owner Md. Khorshed Alam.

On Tuesday, a mobile court jointly conducted by BSTI and RAB fined Nasir Food & Bakery Tk 4 lakh for producing substandard lachaa vermicelli and packaging it with the BSTI logo without any authorization.

The mobile court led by executive magistrate Anisur Rahman also destroyed 190 packs of lacha vermicelli during the drive near Modhumati model town of Hemayetpur in Savar.

Adulterated vermicelli is produced secretly in the factories keeping the main entrance locked from behind.

There are allegations that some unauthorized mills have long been carrying out such illegal business by managing some dishonest officials of the departments concerned.

Such illegal factories have mushroomed in different outskirts of the capital and other cities and districts.

While visiting several makeshift factories in Savar, it was seen that workers were making vermicelli in an unhygienic environment. They were mixing the ingredients with dirty bare hands in dirty and shabby places.

Low-quality flours, ghee and burnt soybean oil are being used to produce substandard vermicelli. Such vermicelli is dried in the sun in the open space and dust gather on the food easily.