Journey to the East: Brahmanbaria and Bangladesh 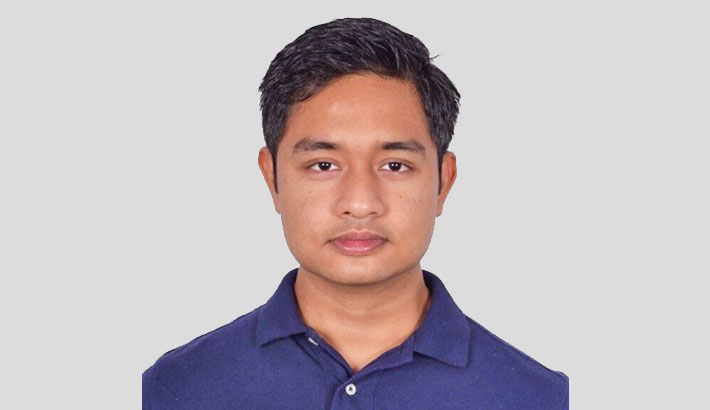 Brahmanbaria, the birthplace of Ustad Allauddin Khan, was once known as a city of music and culture. But in the last few days Brahmanbaria has been in the news for all the wrong reasons; the scene of one of the worst riots in Bangladesh. I decided to travel to Brahmanbaria to see for myself the damage inflicted on the city.

On the entrance to Brahmanbaria I saw a vandalised Highway Police station. The entrance had been charred recently and there were damaged signboards. There was another billboard on the highway of a local Awami League leader. The billboard had a photo of Prime Minister Sheikh Hasina in the corner. It has been shredded by hartal supporters.

On 2nd April, Brahmanbaria looked like any other post conflict location in the world with heavily armed peacekeepers. Important buildings, including Titas district headquarters, were being guarded by border Guards Bangladesh (BGB). The streets were being patrolled by a convoy of about ten Rapid Action Battalion (RAB) and BGB vehicles. The registration plates of the vehicles showed that they had come from Sylhet, Chattogram, and Cumilla.

The city streets were lined with garbage. One local man told me that the streets were not being cleaned since Hefazat men ran rampage throughout the city. It would seem the shovels of the garbage men were stolen and used in the hartal to carry out vandalism. 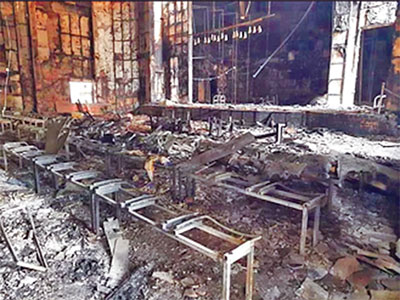 According to locals there are more than 100 thousand madrasa students in the district; it was not possible to verify the information. What was apparent is that there are a significantly large number of madrasas in Brahmanbaria District. According to Banglapedia, Brahmanbaria District has 364 madrasas. Government neglect combined with patronage by individuals with nefarious interests have harmed madrasa education in Bangladesh.

Brahmanbaria has witnessed riots by madrasa students in 2016 too. Madrasa students damaged Ustad Allauddin Khan Music academy. This was something both the government and Hefazat were aware of yet none of them took enough precautions to prevent a recurrence. This time Hefazat supporters completely destroyed the academy leaving behind only a hollow shell of a building guarded by BGB soldiers. The academy had burned for hours and no one came to help; neither the police nor the fire service. The plaster on the walls had fallen apart and the floor had crumbled from the heat. The heat was so intense that it melted the ceiling fans. According to the general secretary of the academy it was set on fire using gunpowder and the same tactic was used in other sites.

This time, they also vandalised the press club and injured more than ten journalists. This was not an isolated incident; journalists were targeted by Hefazat activists throughout the country during the hartal. The attack on the press club left journalists trapped fearing that they would be burned alive as they received reports of important buildings in Brahmanbaria being set on fire. They had been getting reports that different places in the city were being set alight. Thankfully that did not happen. Brahmanbaria press club was attacked 23 year ago and had been recently renovated with the support of Prime Minister Sheikh Hasina.

In Brahmanbaria, vandalism was not limited to the press club but also included the local offices of national television and newspapers. Journalists were attacked with the aim to take away their cameras. People in the streets were attacked for taking photos on their phones. They removed the CCTV cameras from every building first during the attack. There seemed to have been a concentrated effort to prevent documentation.

The land office was burned down with records going back more than 100 years. Inspector General of Police (IGP)Benazir Ahmed has stated that people in the district will suffer for the next 50 years and he is not wrong. Bangladesh has only started to digitise records, and the process was not done in Brahmanbaria. There will be land disputes as the powerful will use this opportunity to grab the lands of the marginalized communities using forged paperwork. It would be very difficult to verify land records in the district. Interestingly enough the land office and records were burned down simultaneously in Hathazari, Chittagong.

In the beginning of the hartal, the police were forced into a defensive position as such they weren’t able to protect the people and property in the district. The rioters had burned down the car of a senior police officer and attacked the residence of the police superintendent of Brahmanbaria district. They attacked police stations, police lines and outposts. The train station was burned down and it is currently closed to the great suffering of travellers. Dhirendranath Dutta Bhasha Chattar built in the memory of Dhirendranath Dutta, an icon of Bengali language movement who was murdered by the Pakistan army during Bangladesh Liberation War, was destroyed. The targets included the offices and homes of Awami League and Chhatra League Brahmanbaria district leaders.

This is not the first time Hefazat supporters have engaged in violence in Bangladesh. This has been repeating over and over again and the government in response has pursued a policy of appeasement. The government removed the works of secular and minority writers from national textbooks on their advice. The government relocated the statue of justice on their advice. All these appeasement tactics have made Hefazat even bolder to the point where they are now calling for the removal of statues of the father of the nation Bangabandhu Sheikh Mujibur Rahman. By listening and following their advice the government had provided them with legitimacy. Mamunul Haque, Joint Secretary General of Hefazat, held a rally in Sylhet and incited a religious mob into attacking the homes of Hindu minorities the same month as the riots in Brahmanbaria.

According to 2011 census Brahmanbaria has a population that is almost two hundred thousand and yet it is not a city corporation. The entire city has one police station and it is hard to comprehend how one police station is adequate for a city this large. In almost all parts of the world Brahmanbaria would be a City Corporation but in Bangladesh it is only a municipality. The government can improve the security situation in Brahmanbaria by upgrading it into a city corporation and creating a Brahmanbaria Metropolitan Police. A permanent regional headquarters of RAB or BGB can be built in the city which will act as deterrence against such occurrence in the future. The government has a duty to protect minorities, journalists, and public property.

Junaid Babunagari studied in Pakistan for a number of years and one is left to conclude from his actions that he wishes to reverse the gains from the Independence of Bangladesh and turn the country into East Pakistan once again. Hefazat might say they are a peaceful non-political organisation but their actions show something else. As writer Rashida Costa said, “Words are from the lips, actions are from the heart”.

The writer is an international relations consultant and can be reached through mahirabrar.com