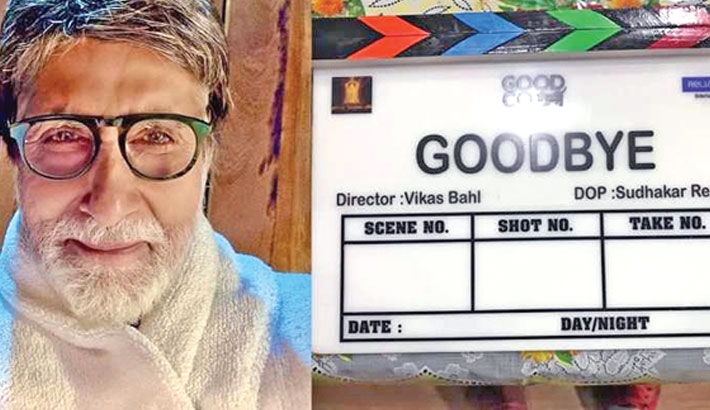 Rashmika has already started shooting for the film and Big B will join her on April 4. Producer Ekta Kapoor is excited to work with Bachchan.

“Goodbye is an extremely special subject which has emotion and entertainment in equal measure. It’s a story that every family will identify with. I am ecstatic to be working with Mr. Bachchan and thrilled to present Rashmika Mandanna in this beautiful film!” says Ekta.

In a social media she also spoke of how she has literally spent her childhood “obsessing over Amitabh Bachchan”. She posted a throwback picture with him and shared a picture of the film’s clapperboard in the next post.

"This is how it's ( hopefully) going! Finally working with the ONLY actor I’ve been waiting to work with ... who I spent my childhood obsessing over @amitabhbachchan ! Wat an honour sir / uncle ! Welcoming new beginnings with #Goodbye," she added.

Shibasish Sarkar, Group CEO, Reliance Entertainment says: "It gives us immense pleasure to announce our next project ‘Goodbye' that brings together the creative forces of Balaji Telefilms and filmmaker Vikas Bahl. The film is going to be as interesting as its title and we are deeply honoured to have superstar Amitabh Bachchan and Rashmika Mandanna onboard with us."

Apart from this, Amitabh has many releases lined up. He will be seen in Rumi Jafry’s psychological suspense drama Chehre, which also stars actor Emraan Hashmi and Rhea Chakraborty. He is also shooting for Mayday, which has been directed by Ajay Devgn and also stars him and Rakul Preet Singh. He also has Jhund and Brahmastra as well as an untitled film where he shares the screen with Prabhas and Deepika Padukone.