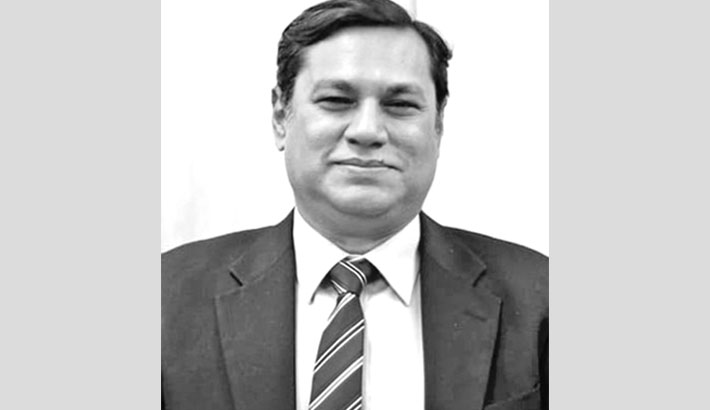 What is Bangabandhu’s philosophy of education? What kind of education system did he envision for the newly independent Bangladesh? My purpose in this article is to shed some light on the education thoughts of the Father of the Nation Bangabandhu Sheikh MujiburRahman on the auspicious occasion of his birth centenary and the golden jubilee of independence of the country. Concerns for producing ideal human resources for social, political, and economic development epitomize his philosophy of education. He believed in creating equal learning opportunities for everyone and enshrined education as a fundamental human right.

Bangabandhu’sthoughts on education are reflected in his speeches, policies, and actions. A review of documents and publications on Bangabandhu reveals that the crux of his educational philosophy was expressed candidly in his two speeches—one delivered in March 1972 and the other in the same month in 1973. Bangabandhu formed an education commission with Dr. Qudrat-e-Khuda as its head in July 1972 to assess the incumbent education system and make recommendations for developing an appropriate education system that would lead toward building the Sonar Bangla, Bangabandhu’s model for a prosperous country. His government also initiated actions for revamping the education system. I will briefly interpret them to delineate the essence of Bangabandhu’s educational thoughts.

In his address to an assembly of teachers and writers of Chittagong on March 30 in 1972 in the government house there, Bangabandhu expressed his 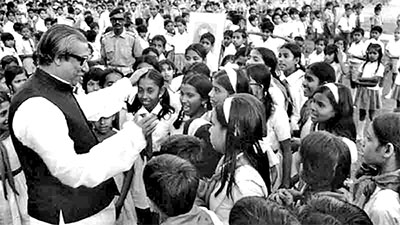 frustration about the education system that Bangladesh inherited from Pakistan.  He repented that the education system failed to produce humans. Instead, it produced amlas (bureaucrats). He inferred that poverty and inequality could not be eliminated and socialism could not be implemented without educating people. He suggested that every teacher and student had to spend some days in the rural areas to spread the light of education among rural people. He revealed that an education commission was being formed involving educationists to establish an education system that would help secure sustainable socio-economic development for the country and implement socialism. He reprimanded all the previous education commissions for betraying the Bangalees.

Bangabandhu further elaborated his vision for education in his address at the first convocation of the Bangladesh University of Engineering and Technology (BUET) on March 20, 1973.  Before the new graduates and faculty members, he stated that the education system that developed during the two hundred years of British colonial rule and continued during the 25 years of Pakistani rule just produced keranis (clerks). He emphasized building an education system that would facilitate the creation of the Sonar Bangla by producing ideal citizens. He highlighted the need for producing skilled human resources for political and economic development and for implementing socialism. He warned against foreign dependence, identifying it as an obstacle to sustainable socio-economic development. He underscored the need for acquiring and producing technological knowledge to offset external dependence. He also reminded everyone about the work of the Qudrat-e-Khuda Education Commission and expected that the commission would submit its report with necessary recommendations to establish an education system that would lead the nation toward progress and emancipation.

The above two speeches represent the key themes of Bangabandhu’s education philosophy such as producing creative and innovative human beings, building an appropriate education system, and ensuring balanced and sustainable socio-economic development.

Bangabandhu did not limit his educational thoughts to rhetorics only. He took proactive measures to materialize his vision. He created the Qudrat-e-Khuda Commission to reform the education system. The Commission published its interim report in June 1973, followed by the final report in May 1974. The 309-page report, titled Bangladesh Education Commission Report, which has so far been the most comprehensive work on the education system reform in Bangladesh, embodied Bangabandhu’s thoughts on education. In its introduction, the report reverberates Bangabandhu’s philosophy when it says that the objective of this commission is to “remove the various defects and deficiencies of … present education system” and acquire the ability to train human resources to achieve a “reasonable standard of life” through the appropriate use of the country’s natural resources. It said the ultimate goal of the education system would be to develop human resources to create a socialist society. No meaningful social, political, and economic development could be achieved without ensuring education for all, it added.

The key observations of the commissions include an emphasis on teachers’ training; ensuring decent salaries for teachers to attract meritorious people to teaching; making Bangla the medium of instruction at all levels of education by instating necessary measures for learning English and other important international languages; emphasis on technical and vocational education; enabling the higher education system to provide direction to national development through teaching and research; emphasis on applied research for national development and building systems and environments for research at the universities; ensuring equal opportunities of education for everyone; and, recognizing education as an investment. The commission recommended spending 5% of the national income on education and gradually increase that to 7%.

Bangabandhu wholeheartedly embraced the recommendations of the report but did not get the opportunity to implement them as he was assassinated in August 1975. However, he initiated some actions before getting the Commission report to materializing his vision of education immediately after taking the rein of the country. The Constitution of Bangladesh framed in 1972 enshrined education as a fundamental right of the citizens.

The Education Ministry issued some press notes in 1972 to inform the citizens about some crucial steps taken to ensure education for all. On February 12, 1972, an Education Ministry press note declared that Bangla shall be the medium of instruction of education upto the higher secondary level. Another press note on February 19 stated that the students from class one to five will get textbooks for free of cost and the students from class six to ten will get those at a 40 per cent discount.

Bangabandhu’s government nationalized the primary schools, altogether 36,165, and significantly increased the salary of the primary school teachers. It adopted an equity approach for the emancipation of women in January 1973 by arranging tuition-fees-free education for girls up to class eight.

Bangabandhu Sheikh Mujib wanted to build the higher education institutions of the country as a place of free thinking and expression by giving them autonomy through the University Order 1973. Four universities including Dhaka University, RajshahiUniversity, Chittagong University, and Jahangirnagar University enjoy that autonomy.

Bangabandhu’s educational thoughts seem to be more relevant than before as the country intends to become a developed country by 2041. Without ensuring quality education and facilitating research and innovation, no country could emerge as a developed country.

The writer is a Professor of Film, Television and Digital Media at the University of Dhaka.