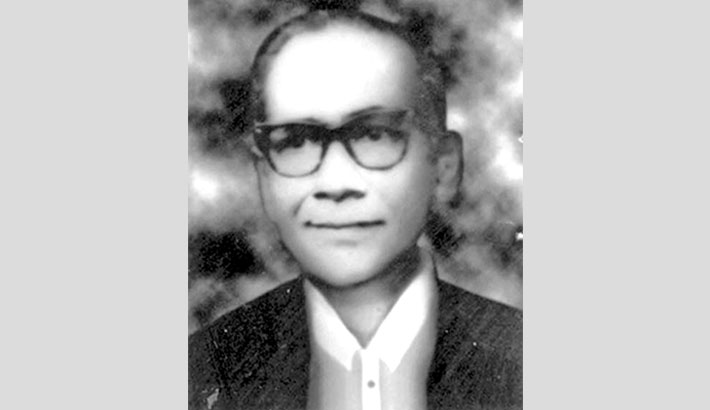 Today is 3 April. A Bangladesh’s giant lawyer and jurist Syed Mahbub Murshed died on this day 42 years back i.e., on 3 April 1979.  His life spanned only 68 years.

His talents, his love of liberty, his love of humanity, - the spur that the clear spirit…He was perhaps the fittest of his contemporaries for the performance of the office of High Court in May 1964 and served close to 1967. He resigned from the position in November 1967.

It was a rare fortune, and the highest possible praise, to be thought worthy of this solicitation by that extraordinary person, who was surpassed by Murshed.

Veteran journalist and columnist Syed Badrul Ahsan wrote in 2008, “Forty years after June 1968, the Agartala Conspiracy Case instituted by the government of Pakistan (during President Ayub Khan’s regime) against Bangabandhu Sheikh Mujibur Rahman and thirty-four other Bengalis remains a point of reference for students of Bangladesh’s history. In these forty years, much debate has ensued about the way the case changed the course of Bengali history and transformed the nature of politics and geography in South Asia, especially in the context of Pakistan and Bangladesh…The Agartala case marked the rise, in meteoric manner, of Sheikh Mujibur Rahman as the spokesman of the Bengalis.”

It is highly laudable that chief counsel of Agartala Conspiracy Case for Bangabandhu was Justice Murshed (British giant lawyer Thomas William was his deputy then in the case). The government caved to the mounting pressure, dropped the charges on 22 February, 1969 and unconditionally released Mujib and his yokefellows on the same day. He came out from incarceration as a public hero. The case and the resulting uprising are seen as major events leading to Bengali nationalism, the Bangladesh Liberation War and finally attainment of Bangladesh.

The Government-Opposition Round Table Conference (RTC) on political and constitutional issues facing Pakistan began on February 26, 1969 at the Pakistan’s President Gen Ayub Khan’s Guest House in Rawalpindi. Justice Murshed also attended the conference to support Bangabandhu Sheikh Mujibur Rahman’s demand for Bengalis. The idea of “One man, one vote” policy in Pakistan’s national election was thrown in the mind of Mujib by Murshed. Justice Murshed was senior to Mujib by about 10 years in age. So, Bangabandhu fondly called him, ‘Murshed bhai’ and he had very high regards towards him. Mujib geared his wheel with this beneficial proposal and he became very vocal then about this demand to accomplish all through Pakistan. And finally, all-Pakistan based national election was held on 7 December 1970 to elect members of the National Assembly based on the formula disseminated by Justice Murshed.

Bangabandhu and his political party Awami League won a land-slide victory in that voting and he emerged as the majority party leader of the entire Pakistan. The rest is history. Bangladesh was born as an independent and sovereign state on 16 December, 1971.

Elective Bodies Disqualification Order (EBDO) - an ordinance was retained by Ayub Khan, the first military president of Pakistan in August 1959. In this ordinance he disqualified 75 elective politicians of the assembly. Most of them were from the-then East Pakistan. This ordinance was abolished in December 1966 because of strong political movement against it, especially by the Bengali politicians and Murshed was a part and parcel of it.

Justice Murshed is qualified, trained, skilled, white-collar professional belongs to legal community having or demonstrating a high degree of knowledge or skill; adept, expert, master, masterful, masterly, proficient, skilled, skilful… It sounds like he seeks some methods of making a living and aspires to become a professional breeder of mustela nigripes in legal profession.

This professional gentleman thus familiarly has pointed out, has been all the time standing near them, with nothing specific visible, to denote his gentlemanly rank on board. He is like the words of Thomas Jefferson, “The wisdom of our sages and the blood of our heroes have been devoted to their attainment. They should be the creed of our political faith.” He is probably an excellent illustration of the ability of a lawyer in this era to combine aspects of competence, honesty and dignity in the practice of law. His learning was great, and his faculty of applying it of the very first order. The work, my fellow citizens, has produced fewer instances of truly great judges, than it has of great man like Murshed in almost every other departments of civil life. A large portion of the ages that are past, have been altogether incapable of producing this excellence.

None else give them so lofty a seat, or invite them to dwell so much above the impure air of the world, the tainted atmosphere of party and of passion. None else could he raised for the perpetual example of the country, and for the crown of undying praise, so truly great a judge as SM Murshed.

He was the kind of scholar and patriot you get excited about explaining to your dear ones. With an incomparable and indelible legacy, Murshed will forever be known as a man of brilliance, a Justice of courage, and a human of deep conviction. He has been a true inspiration to us since long. Honour him, remember him, act for him. He spent his life in pursuit of an equal world. He fought for the unheard, and through his decisions, he changed the course of Bangladesh’s history. We can never repay what he has given us, but we all can honour his legacy by working toward true equality, together.

He was a towering figure, a fighter. Time and time again, he beat the odds. He wouldn't want anyone to give up or be deterred from fighting for the dreams he embodied. Barrister Murshed embodied justice, brilliance and goodness. His passing is an incalculable loss for our democracy and for all who sacrifice and strive to build a better future for our people.

Losing him just fills the whole atmosphere with despair. Let’s fight it though and honour this great soul by our actions. His judgments were uniformly scholarly, meticulously researched and carefully reasoned. His decisions demonstrated that he protected the constitutional rights of any person or group, that, as prescribed by the Constitution, he preferred neither the rich nor the poor, but rather accorded to all equal justice; and as such, he never sought to enlarge the judicial power beyond its proper bounds, nor did he fear to carry it to the fullest extent that duty required.

Justice Murshed was often referred to by all as the fair and fearless judge. Importantly, he will be remembered by the people of Bangladesh as a jurist who always gave of himself completely to ensure that the rule of law was fairly applied and that all citizens benefited from his passion in administering justice.

The tremendous public outpouring of sympathy, grief and tributes on his passing, is in large part due to the fact that he was eminently approachable, as he was someone who not only spoke with conviction, but also listened with compassion. Anyone could stop him and engage him in conversation and so many did! Justice Murshed had the gift of always focusing on the strengths of the persons around him, rather than on their weaknesses.

His judgments would make him immortal in the memory of the judicial and legal fraternity of Bangladesh. Justice Murshed was “a dignified, quiet, tireless, dedicated and hard-working Judge who made an invaluable contribution to the legal system in Bangladesh. Fairness, balance, and the Rule of Law were his guiding legal principles.” His passing has created a deep void on the legal firmament of Bangladesh that will be difficult to fill.

He was a force of nature, the backbone, the heart and soul of our legal industry and his loss is too profound to fathom. He has left a gaping hole in the legal domain of Bangladesh. Always the gentleman. Always had a smile and so incredibly generous with his time.

That time is really important. And he gave it up unselfishly with kindness and love and care. We lost someone really special.

Rest in peace Justice Murshed - a true legend, an iconoclast, a glass ceiling breaker, and a legal icon. He was a champion for good. We lost a very powerful and fair-minded champion. Bless his soul, bless his work, bless his courage and his vision. Be active!

Our nation has lost a jurist of historic stature. We, at the High Court or at the Supreme Court have lost a cherished legal legend. Today we mourn, but with confidence that future generations will remember Justice Murshed as we knew him — a tireless and resolute champion of justice.  My deepest condolences to his family. What an immeasurable loss.

One of the brightest lights in the legal industry has gone out.  He sang legal songs for his people but when his time runs out. He would have many well-wishers and friends to sing for him…

May he rest in eternal peace in Heaven.