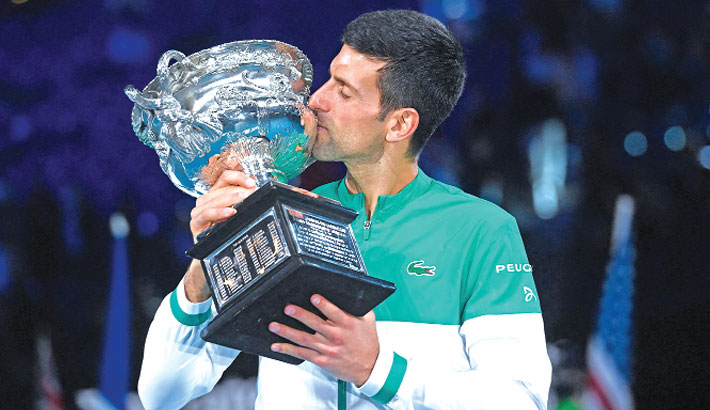 In winning a third straight Australian Open for the second time, the Serb claimed his 18th Grand Slam title to move within two of Roger Federer and Rafael Nadal who have 20 each, while denying Medvedev his first.

Rarely has a player been so dominant at a single tournament with the Serb's record-extending ninth title moving him past Federer's eight at Wimbledon but still a long way behind the 13 Nadal has won at Roland Garros.

But it was a rollercoaster ride to get there, with Djokovic dropping five sets en route to the final and battling an abdominal injury that nearly forced him to pull out after the third round. 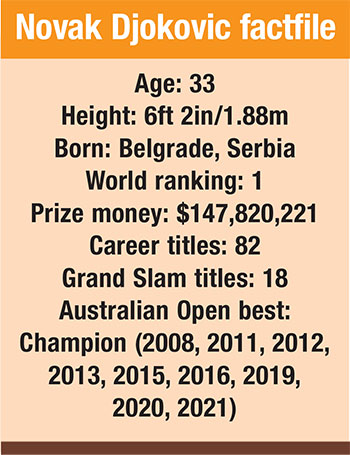 Despite admitting it was a gamble to keep playing, with a risk the injury could get worse and affect the rest of his season, the 33-year-old chose to continue and it paid off.

"Thanks to this court, the Rod Laver Arena, I love you each year more and more -- the love affair keeps going," said a relieved Djokovic, while paying tribute to Medvedev.

"I really like him off the court ... but on court he's definitely one of the toughest players I have ever faced in my life.

"It's a matter of time till you hold a Grand Slam."

Djokovic's speech to the crowd came after Tennis Australia chair Jayne Hrdlicka was booed for mentioning the Covid vaccine and the Victorian government.

The unusual scenes came at the end of a tournament that was delayed three weeks over the coronavirus and had to bar fans for five days when state authorities ordered a snap lockdown.

Medvedev, 25, is one of the smartest players on tour, keeping his opponents guessing with his flat and low groundstrokes, changing up the pace and angles, as he blends impenetrable defence with opportunistic offence.

But the Serb, who held a 4-3 head-to-head record against him but had lost three of the previous four, had his measure. "It's never easy to find words when you have just lost the final of a Grand Slam," said Medvedev.

"But congrats Novak and his team. I mean, nine Grand Slams in Australia and 18 total is amazing and probably not the last one."

The win reinforced Djokovic's status as world number one, where he will mark his 311th week when the new rankings come out on Monday, surpassing Federer's record of 310.

Medvedev will move to a career-high three in the rankings, behind Nadal.