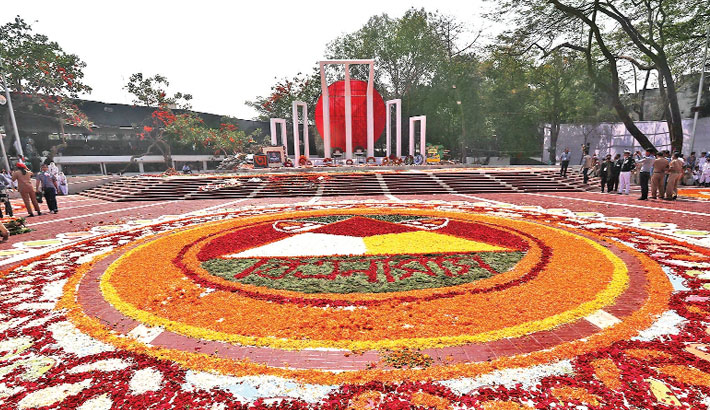 Mother language is not a mere mode of communication, but an expression of life, foremost vehicle of culture and nationalistic identity beyond geographical isolation and political boundary. Int’l Mother Language Day on 21st February, therefore, reinforces our pride, hope and solidarity associated with mother tongue.

Credit entirely goes to Bangladesh for acceptance of 21st February by the UN as ‘Int’l Mother Language Day’ in commemoration of language martyrdom. The heat and passion generated here over suppression of mother language by Pakistan and unilateral imposition of Urdu as sole official language gave rise to a sense of integration with collective identity and a glorious movement in erstwhile East Pakistan, now Bangladesh. The language movement outbroken on 21st February 1952 took the toll of supreme sacrifice or martyrdom of four demonstrators- Rafiq, Jabbar, Salam and Barkat in the hands of suppressing Pakistani force. Ultimately this movement fuelled by love for mother language led to liberation of Bangladesh from Pakistan.

For Bangladesh it is Shaheed Dibas in addition, and for others it is International Mother Language Day proclaimed by the United Nations Educational, Scientific and Cultural Organization (UNESCO) in November 1999. The resolution was suggested by Rafiqul Islam, a Bengali living in Vancouver, Canada. He wrote a letter to Mr. Kofi Annan asking him to take a step for saving all the languages of the world from the possibility of extinction and to declare an International Mother Language Day on 21 February in view of 1952 killing in Dhaka on the occasion of Language Movement. Celebration of International Mother Language Day is an assertion of the indescribable importance and significance of mother language. We must take the opportunity to understand the significance of language and mother language on this glorious occasion.

In the Bible the gospel of St. John says, "In the beginning was the Word, the Word was with God, and the Word was God." The Upanishads also attribute 'akshar' or alphabet as the first manifestation of God in creation and as such should be adored as expression of God.  Although all creatures communicate in their own ways only the humans have the rare privilege of having a language for expression of necessities, thoughts, emotions and feelings. Significantly, the mother language is the first curriculum of our learning through imitation, instruction, trial and error and education.

Just as a part of our being mother language is assimilated in our living organism along with mother's milk right from birth. Whether the child understands or not the mother communicates through her own language and the child responds. Thus mother language enters our vast unconscious mind and remains stored. At the time of intuitive and instinctive expression it is retrieved as reflex action. So mother languge bridges the gap between the vast unconscious and the conscious mind at times of necessity, especially during creative compositions and hearty music.

In Europe the renaissance was characterized by unprecedented urge for creative writings in rather unsophisticated mother languages. Astounding Elizabethan literature was a product of this urge. William Shakespeare, who learnt little Latin and less Greek became the all time best writer in English due to his intuitive aphorisms, insight into characters and emotional expression of wisdom which found full play in his own mother language. Dante composed his immortal 'Divine Comedy' in his mother language Italian. The unique Russian literature of 19th century was written in rustic mother language Russian.

During about two hundred years of British rule Indians, particularly the Bengalis learnt excellent English but they used that knowledge predominantly for official purpose and in developing mother language. Adequate learning of two other languages or at least one more is extremely helpful for developing linguistic sense and necessary coinage for creative writing. Michael Madhusudan and Bankimchandra initially attempted composition in English. But very soon they realised that despite underdevelopment of the then Bengali the mother language was the best medium for them.

Despite being gifted with amazing genius Rabindranath Tagore wrote only in mother language and shaped it to its modern form to suit his expression which made him win the Nobel prize as the first non-European recipient of the same. Instead of writing in English he rather translated the theme of his selected songs into English for understanding of the foreigners. In spite of being devoid of their original beauty available in metrical inventions, metaphors and subtle linguistic nuances it overwhelmed the West with just a glimpse of the beauty of the original in mother language Bengali. We must remember that the prose writings of Tagore are very much unique in world literature with intense cadence and amazing rhetoric and he composed short stories in Bengali mostly during his stay in Bangladesh at a time when the short story as literary genre was yet to be developed even in English literature.  At present Bengali is one of the seven major languages of the world and enormously developed.

There is a necessity to learn Bengali correctly as its spelling was originally phonetical but subsequently distorted particularly in dialects. Grammar and vocabulary of Bengali have several subtleties. Multiple meaning of words and grammatical variations defeat our dictionary understanding of vocabulary. For instance a foreigner learnt little Bengali and read Tagore's 'Puratan Bhritta' but could not understand the meaning of 'buddhir dhenki'. He asked the poet who explained that it was used in appreciation of the servant's intelligence. That foreigner tried to use it on other scholars and told them 'buddhir dhenki' but naturally all of them took exception.  Tagore himself was amazed to read Sukumar Ray's 'Khai Khai' in which the poet showed the use of the word 'khai' with innumerable meanings and significance which no dictionary can teach. Those who have read the poem will instantly agree that language is to be understood in the context of culture as well for which mother language has no comparison.

In Bangladesh, February 21st is also called 'Shaheed Dibas' as the anniversary of the pivotal day in the country's history.  It is time to celebrate victory of Bengali language which is an integral part of Bangladesh’s culture. But at the same time it is time to renew our pledge to know our language and literature more and better and do something really worthwhile to promote Bengali in various ways  to pay true tribute to those who sacrificed their lives for love of mother language,  and above all to our mother language, Bengali.

The writer is a freelance columnist