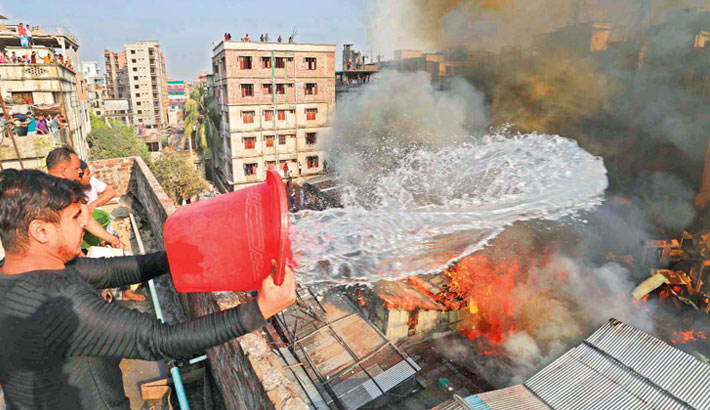 A man throws a bucket of water in an attempt to put out a fire at a slum in the capital’s Manik Nagar on Sunday. Kamrul Islam Ratan

A devastating fire ripped through a slum at Manik Nagar in the capital on Sunday, burning around 150 shanties to ashes and sending the dwellers under the open sky.

No casualties were reported in the fire incident.

Lima Khanam, duty officer of Fire Service and Civil Defence control room, told the Daily Sun that the fire broke out at the slum named ‘Cumilla Patti’ around 3:20pm.

On information, seven units of the firefighters were dispatched to the spot and they could douse the blaze at 4:45pm, she said.

The reason behind the fire and the loss could not be known immediately, said Lima.

Wishing not to be named, an officer of the Fire Service and Civil Defence, told the Daily Sun that the slum owned by 11 people had several hundred small shanties.

“We are yet to count how many houses have burnt down. It has primarily been estimated that the fire burnt about 150 shanties,” said the officer, who visited the spot.

Asked about the reason of the fire, he said that the exact reason could not be known. “But we heard that the fire originated from earthen woven,” he said.

Praloy Kumar Shaha, officer-in-charge of Mugda Police Station, said, “There were around 100 houses in the slum.  Most of them burnt down,” he said.