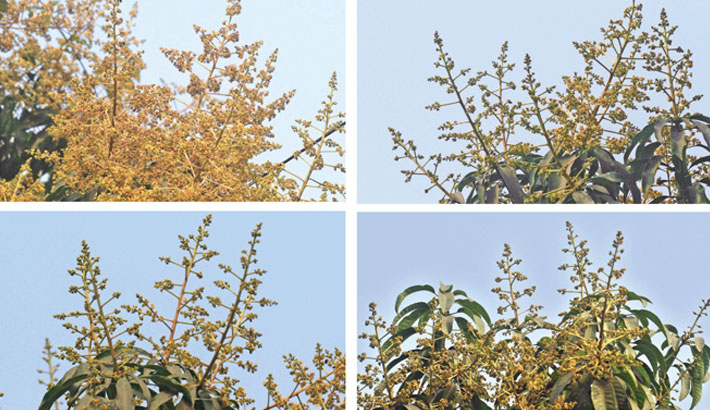 Mango trees have started budding over the last few weeks across the country at the onset of spring.

The sweet smell of the budding mango trees fills the air around the orchards across the country, making the farmers hopeful of a bumper yield.

During this period, the temperature sees a smooth rise, which is favourable for the growth of mango at the early stage of fruiting.

Twenty to 30 degrees Celsius temperature is very favourable for sprouting and this year the average temperature has been 26 to 31 degree Celsius in the country.

“The flourishing mango budding at this stage predicts an excellent production of the most popular fruit of the country this season if the weather condition remains favourable till the harvesting,” said Mehedi Masood, director of a project under the Department of Agriculture Extension (DAE) on nutrition through year-round fruit production.

Rest sprouting of mango is expected by the next week of the month, he added. The prevailing climatic conditions are suitable for mango budding and thousands of mango trees have already worn eye-catching looks with huge blooms.

so that the mango could grow massively.

Sakir Hossain, a mango producer in Rajshahi, said they have been taking all possible cares like spraying insecticides and fungicides on the trees from the beginning of the season with the hope to have a good bloom.

Agriculture officers of the agriculture department across the country are also working in all unions of the division to provide farmers with the necessary support for mango cultivation in scientific ways.

The agriculture officers are also providing support to control the possible attacks by hoppers and some other pest attacks on the mango flowers.

Farming of mango has been increasing each year as farmers are earning huge profits by cultivating high yielding and hybrid varieties like Amropali, BARI- 4 along with traditional and popular indigenous varieties.

Several different verities of mangoes are being produced in the country. Of those, the most prominent ones include Amropali, Surjapuri, BARI 4 Fazli, Haribhanga, Aswina, Khirshapati, Guti and Mistimodhu.

A total of 70 different fruits are being produced in the country; mango is the second largest producing fruits in the country after banana.