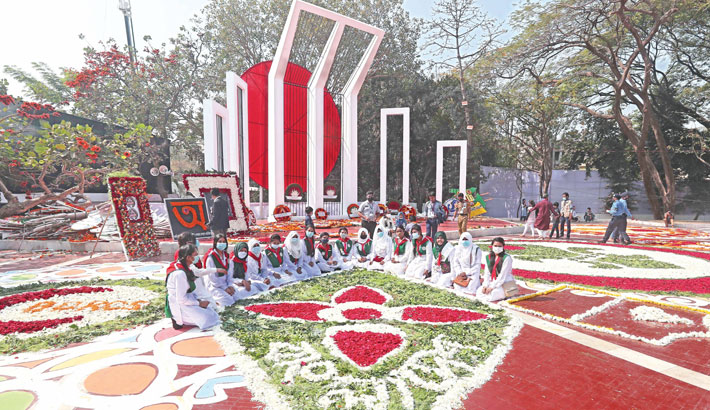 The nation observed Amar Ekushey and International Mother Language Day on Sunday, paying glowing tribute to the martyrs of the historic Language Movement of 1952.

President Abdul Hamid and Prime Minister Sheikh Hasina led the nation in paying homage to the valiant sons of the soil who sacrificed their lives to establish Bangla as state language of then Pakistan.

After placing wreaths, they stood in solemn silence as a mark of respect for the language martyrs.

Usually, the President and the Prime Minister place wreaths at the Central Shaheed Minar. But this year they were not present in person due to the ongoing corona pandemic.

Chief justice Syed Mahmud Hossain placed a wreath at the Shaheed Minar in the morning.

Street paintings, festoons, banners, buntings and placards with popular inscriptions on the language movement featured the areas adding to the solemnity of the day.

The national flag was hoisted at half-mast and black flags flew atop government, autonomous and private offices across the country on the occasion.

On February 21, 1952, the Pakistani police opened fire on a peaceful procession in Dhaka and brutally killed many people, mostly students, including Salam, Barkat, Rafiq, Jabbar and Shafiur.

The day is being observed as International Mother Language Day in 193 countries across the globe following United Nations Educational, Scientific and Cultural Organization (Unesco) recognition of Ekushey February on November 17 in 1999.

Back in 1952, then autocratic Pakistani ruler imposed Urdu, the language of less than 20 percent people, as the only official language of Pakistan.

But, the students and people of East Pakistan rose in revolt against the then Pakistan ruler’s refusal to recognise Bangla, the language of 56 percent people of Pakistan, as one of the state languages.

In the face of strong opposition in 1956, the Pakistani government was compelled to make Bangla, alongside Urdu, state language of Pakistan.

The party will hold a discussion at its central office on Bangabandhu Avenue in the capital at 4:00pm today with its President and Prime Minister Sheikh Hasina in the chair.