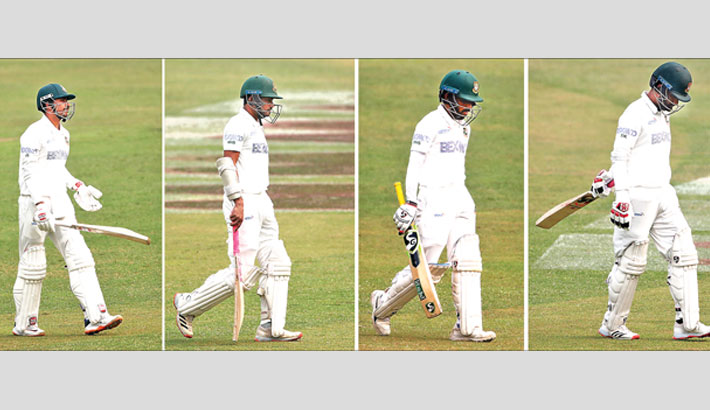 (From left to right) Bangladesh batsmen Soumya Sarkar, Najmul Hossain, Mominul Haque and Tamim Iqbal walk back to the pavilion after their dismissal during the second day of their second Test against West Indies at the Sher-e-Bangla National Cricket Stadium in the capital on Friday. —reaz ahmed sumon

Bangladesh were considered as favourites before the start of the Test series against West Indies but as things have panned out the hosts are now fighting to avoid further embarrassment in Dhaka after losing the opening Test in Chattogram.

Bangladesh batsmen will have to show their skill-set and temperament when their opponent bowling unit will start their mode of operation in an attempt to make them follow-on.

Tigers are already four wickets down for 105 runs in their first innings on the second day, replying West Indies’ 409 and they are still trailing by 304 runs and need 105 more runs to avoid follow-on.

The way top-order crumbled without showing any kind of resistance only exposed their weakness against a disciplined bowling unit.

Bangladesh’s batsmen surely lacked concentration and gifted their wickets whereas their opponent decided to follow a different route that proved dividends for them.

If their batting was disappointing, their bowling certainly looked out of sort as they failed to execute any proper plan of action.

Nkrumah Bonner and Joshua Da Silva went on to score the 90s while Alzarri Joseph made 82 runs to help the visitors post a mammoth total.

Bangladesh opener Tamim Iqbal admitted they are only to be blamed for gifting away their wicket.

“Certainly (we had gifted our wickets). Naturally, the wicket was extremely good to bat on and when we were batting there was nothing happening in the wicket,” said Tamim.

“Look all the four wickets that have fallen were not due to good balls and the four batsmen made errors. If we were two wickets down then we would have been in a comfortable place but as we lost four wickets certainly they are on top.

“We can only come back if we can make a partnership over 150 runs,” he said.

Tamim defended his strategy of playing aggressive cricket as he made 44 off 52 balls with six fours and a six and said that it would have backfired if they tried to play too defensive.

“I think I played a bit aggressively but apart from me, no one was batting with the same mindset. I think my intent was good and apart from the delivery through which I got out, there was hardly any bad shot that I played.

“I felt that I should hit the ball that is there to hit because I felt that batting too defensively would hardly be helpful. If you don’t get out playing rash shot then it is alright but unfortunately I got out in a delivery that should have been avoided,” he added.

Joshua Da Silva, who missed out his maiden Test ton, however, echoed differently to Tamim.

“Test cricket is all about batting time. It gets easier as you bat long. You have to grind it out but then the runs begin to come,” said Joshua.